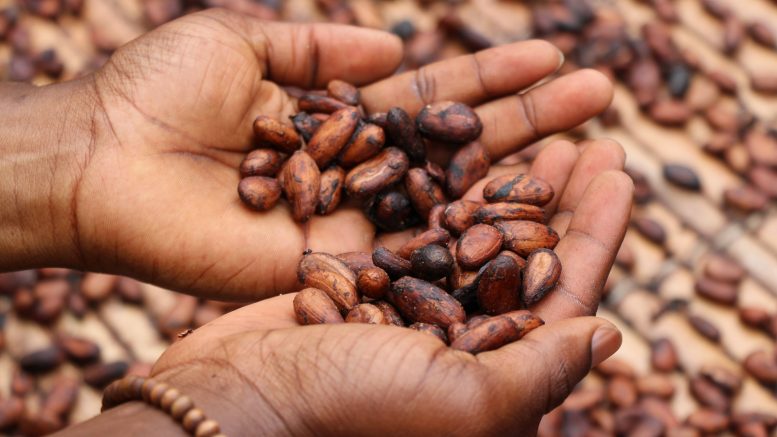 Hands holding dried cocoa beans before they are crushed in an Ivory Coast village. Photo by Etty Fidele on Unsplash

JB Foods has broken ground on a cocoa processing facility in Abidjan, Ivory Coast, marking an expansion aimed at putting processing facilities at the source, the cocoa-ingredient processor said in a filing to SGX Thursday.

The Ivory Coast expansion will have an initial investment of around EUR60 million, JB Foods said.

The facility will produce cocoa ingredients including cocoa mass, butter and powder, and it will use renewable energy and responsible waste-management processes, the filing said.

“We recognise that as the biggest cocoa producer in the world, Côte d’Ivoire is not only strategically positioned with the availability of raw materials, it also boosts of a robust and experienced workforce, and a developed infrastructure that facilitates efficient supply chain management,” Tey How Keong, JB Foods’ CEO, said in the statement.

Establishing cocoa processing facilities near the cocoa sources is part of JB Foods’ strategy for sustainable growth, Tey said, adding Côte d’Ivoire has a goal of processing all of its cocoa production locally by 2030.

“We believe that this strategic move will enhance our sustainability efforts through direct cocoa sourcing at crop origins, thus enabling greater traceability, and directly impacting the quality and value of our products and service,” he said.

Completion of the Abidjan factory is expected by the fourth quarter of 2024, the filing said.

JB Foods’ products are used to produce chocolate, chocolate confectionary and cocoa-related food and beverages. The company is a major cocoa ingredient producer, including cocoa butter, cocoa powder and cocoa mass. Its products are mainly sold under the JB Cocoa brand name.