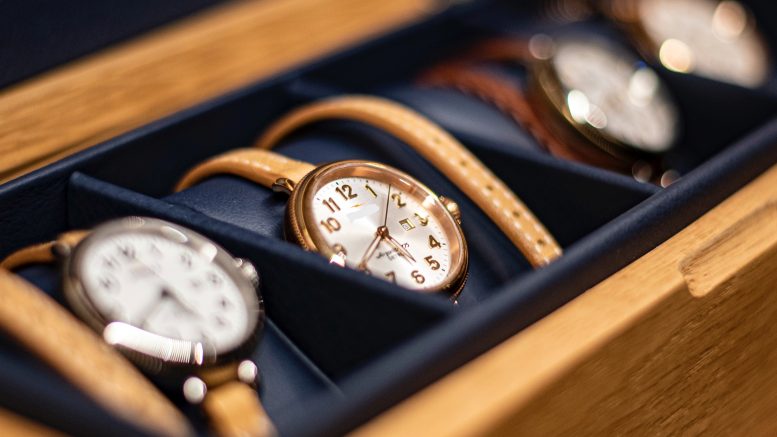 A watch display. Photo by Amin Hasani on Unsplash

As the world begins to roll back pandemic restrictions, wallets are opening up — and watches are on consumers’ shopping lists.

Watch enthusiasts across at least eight countries in Europe and Asia-Pacific joined snaking queues outside Swatch outlets in March for the opportunity to purchase a bioceramic MoonSwatch, produced in collaboration with Omega.

The 11-model collection, named after planetary bodies and priced at less than S$400 per watch, is not a limited edition, but it quickly sold out, all the same.  Swatch has reassured consumers that the MoonSwatch stock will soon be replenished, but that has not halted online resale listings, some with 400 percent markups.

Analysts are forecasting a strong recovery for watchmakers.

The Covid-19 pandemic pushed the watch industry’s revenue down by at least 25 percent, according to a study by McKinsey & Co. The decline was fueled by the industry’s dependence on brick-and-mortar outlets.  Only five percent of global sales are estimated to occur online.  Sales were further hurt by the lack of global travel.  Approximately 30 percent of pre-pandemic watch purchases were made by consumers on trips overseas, according to McKinsey.

But the rush for Swatch’s latest bioceramic collection shows watch sales are ticking strongly ahead.

Indeed, media reports have pointed to a global scarcity in high-end watches, with demand outstripping supply for Rolex, Cartier, Patek Philippe and other brands as the pandemic re-opening spurs “revenge spending” on timepieces.

The luxury watch market grew 32 percent this past year and returned to pre-pandemic levels, with more than 40 billion euros (nearly S$60 billion) in sales, according to a December 2021 report by Bain & Co., entitled “From Surging Recovery to Elegant Advance: The Evolving Future of Luxury.”

Watches.com is expecting to develop multiple revenue streams from its move into online watch sales, not only from the sale of the watches, but also from selling online “shelf space” to watchmakers and generating positive cashflows from the time between when a sale is made and when manufacturers are owed payment.

In a recent presentation filed to SGX, Watches.com pointed to potential income from a range of fees on the site, including payment processing, order fulfillment, featured listings and advertising. The company is also eyeing private-label sales.

Christian Kwok-Leun Yau Heilesen, executive director of Watches.com, said in the statement: “Our group intends to harness algorithms and big data capabilities to scale up the online watch store, watches.com, transforming it into a buoyant online marketplace.”

He said he expected revenue to flow from both the watch merchants and from watch buyers.

Other analysts are also expecting watch demand to grow.

Indeed, in a recent report on The Hour Glass, a Singapore-listed multi-brand watch retailer, KGI Research Singapore was upbeat, noting that luxury retailers appear to be inflation-proof.

“With travel and social gatherings still limited in many parts of the world, the shift from spending on experiences to goods is likely to stick around for another year,” KGI said in a note published mid-February.

A recent DBS report on The Hour Glass was also upbeat on the industry, citing a “V-shaped recovery” in the luxury goods industry last year and Asia’s growing wealthy class. Asia’s number of high-net-worth individuals (HNWIs) is forecast to grow at a four-year compound annual growth rate of 6.4 percent, DBS said, citing data from Statista and Credit Suisse.

Watch-sellers appear to be learning from the pandemic, as they increasingly cater to virtual shoppers.

McKinsey research projects that online watch sales will more than double to US$6 billion within the next three years.

In 2019, the internet accounted for just five percent of direct-to-consumer watch sales.  By 2025, McKinsey expects online retail sales to jump to as much as 20 percent.

Already, around 30 percent of consumers in China – one of the world’s largest markets for high-end watches – say they have purchased a premium to ultra-luxury watch online within the past six months. Around 53 percent of U.S. consumers report the same, the McKinsey report says, citing data from an Agility global consumer survey.

China’s luxury market – which has faced headwinds this year from continued Covid-related restrictions — is closely watched for a recovery in 2023. That’s according to a report from consultancy Bain & Co., published in January, called “A Year of Contrasts for China’s Growing Personal Luxury Market.”

“Sporadic localized Covid-19 outbreaks will likely continue throughout the year. We expect a corresponding negative impact on shopping-mall traffic in affected cities,” the Bain report said. But it added that digitalization in China is high and increasing, further accelerated by the pandemic. That’s causing online luxury sales to grow faster than offline sales, the Bain report said.

However, luxury watch sales penetration online was low, at less than 5 percent in China in 2021, largely unchanged on-year, the Bain report said. That may leave a lot of room for growth in the segment, as the report noted the related jewelry segment had around 10 percent online sales penetration in 2021, up from 7 percent in pandemic-hit 2020.

In addition to being able to sport a luxury item on their wrists, buyers of high-end watches receive another side-benefit: appreciation.

Bob’s Watches, a reseller of Rolex watches, found that the luxury brand’s watches appreciated at a rate faster than both gold and property over a 10-year period.  They even provided better returns than the Dow Jones Industrial Average, the company said in a report entitled “Rolex Outperforms”, published in February.

The average price of a used Rolex watch has climbed to more than S$17,000, up from less than S$7,000 a decade ago, according to the reseller.

Bob’s Watches notes another phenomenon: the pace of appreciation has quickened in recent years.

“The amount that Rolex prices have gone up since the beginning of the pandemic (2020) is nearly equal to the total price increase that can be observed during the entire previous five-year period, and this trend shows no signs of slowing,” Bob’s Watches says in the report.

This article is sponsored article.