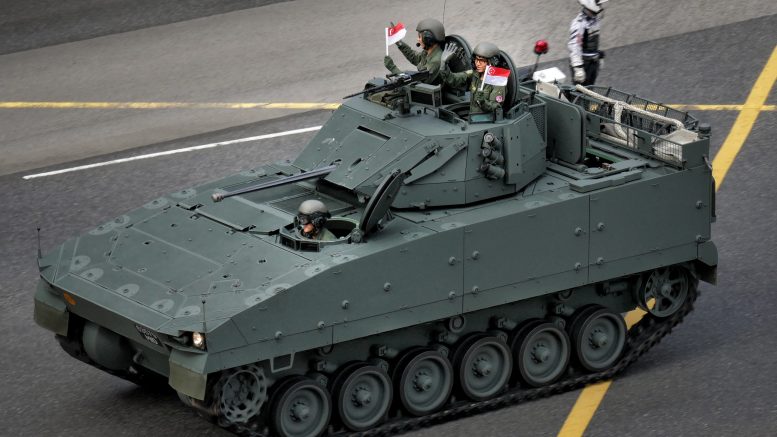 A Singapore tank in the 2020 National Day parade. Photo by Justin Lim on Unsplash

The Monetary Authority of Singapore (MAS) pulled out the bigger guns Thursday in its battle against fast-rising inflation.

Singapore’s central bank, called the Monetary Authority of Singapore (MAS), used two of its three tools on Thursday to tighten policy, in a sign inflation in the city-state is at worrying levels. The MAS had already tightened policy at its October meeting and at a rare between-meeting move in January.

Selina Ling, chief economist and head of treasury research and strategy at OCBC, said the MAS’ move was in line with major central banks’ “whatever it takes” anthem. She said the big move wasn’t a surprise to her as inflation is “running hot and furious,” amid the war on Ukraine and China lockdowns to stem the spread of Covid-19.

Ling said the MAS may be keeping its weapons at the ready.

“Underlying inflationary pressures remain a risk over the medium term. This suggests that the light of the end of the inflation tunnel is not yet visible,” she said, noting among other pressures is a backlog of delayed residential projects which could feed into rents. As the economy reopens, foreign workers are returning to Singapore, driving up demand for housing; in addition, the city-state’s perennial labor shortage is turning more acute amid re-opening pressures for more workers.

“All in, MAS core inflation is forecast to pick up sharply in the coming months,” the central bank’s statement said Thursday, pointing to higher commodity prices and supply-chain disruptions due to the war on Ukraine and the pandemic. In addition, the central bank cited “strong pent-up demand for discretionary expenditure,” which could increase the pass-through of accumulating business costs.

The MAS is unusual in that instead of interest rates, it uses the exchange rate for the Singapore dollar to set policy, because of the open and small economy. The policy is set by adjusting the Singapore dollar’s trading band, based on an undisclosed basket of currencies weighted to the countries’ levels of trade with the city-state. The MAS can adjust the mid-point of the band, the size of the band and the slope of the appreciation.

The slope reflects the MAS’ assessment of the macroeconomic outlook, the midpoint is used to quickly align policy to near-term economic pressure, while widening the band is aimed at dealing with increased volatility and uncertainty.

On Thursday, the MAS pulled two of the three levers: It re-centered the mid-point of the policy band to the current level of the basket and to slightly increase the appreciation rate of the policy band. The width of the band wasn’t changed. The currency basket has been trading at the upper half of the policy band over the past three months and was near its upper limit, the MAS said.

Keeping the Brakes On

Alex Holmes, emerging Asia economist at Capital Economics, said that with economic growth to remain strong and core inflation likely to remain elevated, the MAS is likely to keep holding the reins for at least a couple years.

“As such, the Singapore dollar is set for an extended period of appreciation, including against a strong U.S. dollar,” he said in a note Thursday. Holmes added that while higher commodity prices and “re-opening inflation” from the easing of Covid-related restrictions are likely temporary, underlying price pressures will persist amid stronger economic growth; he forecast the city-state’s economic growth would be faster than its pre-pandemic trend over the coming quarters.

Maybank’s economists were relatively sanguine on the outlook for further moves by the MAS.

“We are expecting the MAS to maintain the current tighter stance and steeper slope at the October meeting, unless inflation surprises on the upside to such an extent, warranting yet another material change to the MAS’ inflation forecast,” Maybank said in a note Thursday.