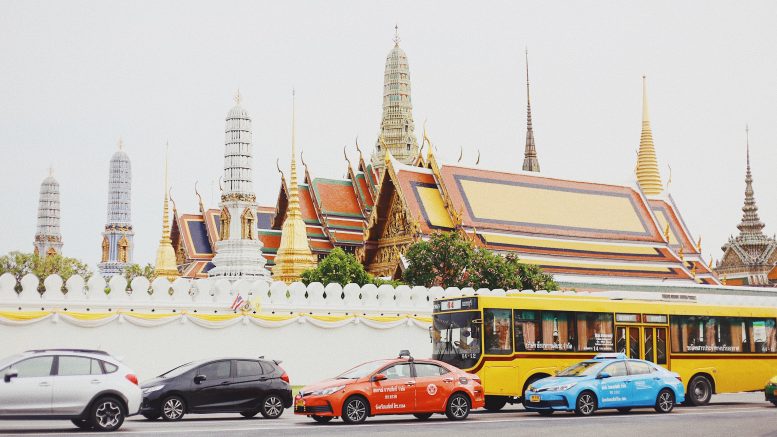 The Grand Palace in Bangkok, Thailand. (Photo by Taylor Simpson on Unsplash)

The ADB has cut its economic growth outlook for Southeast Asia amid risks from the war on Ukraine and from the Covid-19 pandemic.

In December, the ADB had expressed optimism as the region was easing Covid-related restrictions. But in the April report, the development bank, while still expecting a robust recovery in domestic demand across Asia, said the risks from Russia’s invasion of Ukraine, the continued impact from the pandemic and monetary tightening in the U.S. were a trifecta of risks for developing Asia.

Alfred F. Park, chief economist at ADB, highlighted the clouds on the horizon.

“Escalating geopolitical tensions could impede trade and production, and stoke inflationary pressures. Aggressive monetary policy tightening in the United States may lead to financial instability. And Covid-19 remains a threat: the current Omicron outbreaks in the People’s Republic of China could endanger regional growth and supply chains, and more deadly variants could still emerge,” Park said in the report.

He also noted the pandemic had introduced longer term risks for Asia, such as learning losses from prolonged school closures which could exacerbate economic inequality.

But he still forecast developing Asia would post 5.2 percent economic growth this year on solid exports and strong domestic demand, although that was below the pre-pandemic trend. The inflation rate in the region was forecast to grow to 3.7 percent this year, with energy and commodity prices remaining elevated, he said.

In Southeast Asia, economic momentum was getting a boost as Covid vaccination coverage increases and mobility restrictions are being eased, the ADB said. It pointed to stronger domestic consumption, investment and consumer and business confidence in Indonesia, Malaysia and the Philippines, and to external sector drivers in Singapore and Thailand. Brunei’s growth was expected to be strong on the expansion of its oil and gas output, but Myanmar’s economy was likely to continue contracting on political instability.

“A high vaccination rate and the steady rollout of Covid-19 booster shots will facilitate the progressive easing of domestic and border restrictions, supporting recovery,” the ADB said in the report.

“The main risks to the outlook continue to be uncertainty over the COVID-19 pandemic and the weaker-than-expected economic performance of major trading partners,” the ADB said. “Faster-than-expected monetary policy tightening in advanced economies could reduce liquidity in financial markets and put pressure on Singapore’s financial stability because of capital outflows and spillovers of higher interest rates.”

Helping to bolster growth, the developing Asia’s remittances were resilient, with remittances in the third quarter of 2020 up 7 percent from the same period in 2019, the ADB said.

Within Asia, remittances are hugely important, particularly in poverty reduction. According to the Asian Development Bank (ADB), Asia received $315 billion in remittances in 2019, making it the largest remittance-receiving region. Remittances can make up a huge portion of the economy for some regional countries. For example, nearly 40 percent of gross domestic product (GDP) in Tonga in 2020 was from remittances, and nearly 10 percent of GDP in the Philippines in 2020, and 6.3 percent in Vietnam, according to World Bank data.

To be sure, Central Asia, which is most dependent on remittances from Russia, will likely see a stronger impact from the war in Ukraine, the ADB said. Georgia, Uzbekistan, the Kyrgyz Republic and Tajikistan all had remittances equivalent to more than 10 percent of their pre-pandemic gross domestic products (GDP), the ADB said.