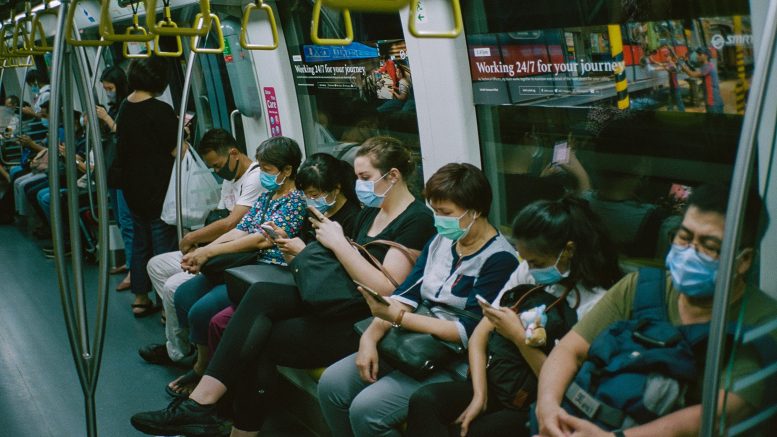 Masked passengers on Singapore's MRT, published in June 2020. Photo by shawnanggg on Unsplash

Frasers Hospitality Trust said Monday it has completed the acquisition of the reversionary freehold interest for the Sofitel Sydney Wentworth, located in Sydney, Australia, from Frasers Property.

Vallianz Holdings has entered a memorandum of understanding (MOU) with Royal IHC to collaborate on the design and construction of a service operation vessel (SOV) to support the operations and maintenance of offshore windfarms, the company said in a filing to SGX Monday.

The battery-hybrid SOV will feature advanced levels of integration and autonomy, with preparation for “true zero” emissions operation by using full battery offshore charging system and alternative fuels, Vallianz said. The SOV will be built at Vallianz’s shipyard in Batam, Indonesia, the filing said.

In addition, Vallianz said it entered an MOU with Bernhard Schulte Shipmanagement (Deutschland) GmbH to provide ship management services for the SOV.

Sinohydro-SEC JV will undertake the contract awarded by Singapore’s Land Transport Authority (LTA) in February for the design and construction of the Pasir Ris East Station for the Cross Island Line 1, the filing said.

Spindex Industries said Monday its Shanghai, China, plant will be closed until 2 April to comply with local authorities’ measures.

“The group’s supply chain and customers that are exposed any Shanghai city closures will also be affected,” Spindex said in a filing to SGX. “The extent of any financial impact is not possible to ascertain at the moment as the situation remains fluid. However, it is expected to have a negative impact on the financial performance of the group in FY2022.”

Shanghai has begun a two-stage lockdown of the city to stem the spread of the Covid-19 virus, according to media reports.

The takeover offer for Shinvest Holding has resulted in the offeror, VTTSG Holding and its concert parties, owning, controlling, or agreeing to acquire 93.47 percent of the company, according to a filing to SGX Monday.

The offeror intends to compulsorily acquire the remaining shares at S$3.50 a share, and delist the company, the filing said.

VTTSG Holding is owned by the Teo Family Group, which includes four company directors who are substantial Shinvest shareholders.

How China’s textile sector would weather a potential trade war