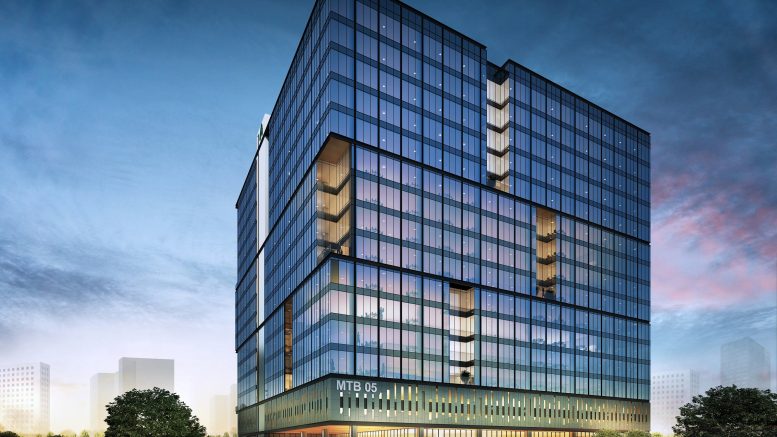 An artist’s impression of MTB 5, a 700,000 square-foot multi-tenanted building owned by Ascendas India Trust located in International Tech Park Bangalore. The building is expected to be completed in the second half of 2020. Credit: CapitaLand

Fidelity Investment Trust acquired 405,858 shares of First Resources on 9 February, with 15,600 acquired in a market transaction, 96,400 acquired in off-market married deals and 293,858 coming from an inter-fund transfer from another fund managed by Fidelity Management & Research Co., according to a filing to SGX Monday.

Fidelity Management & Research Co., which is wholly owned by FMR, is deemed interested in the shares in its capacity as investment advisor of funds and accounts, including certain funds of Fidelity Investment Trust, the filing said.

As a result of the trades, FMR’s deemed interest in First Resources rose to 7.85 percent from 7.84 percent previously, the filing said.

Australia Hongshan Capital became a substantial shareholder of CapAllianz Holdings, after acquiring 925.93 million shares of the company, or a 10.9 percent stake, at S$0.0027 a share via a placement, according to a filing to SGX Monday.

Australia Hongshan Capital, which did not hold any CapAllianz shares at the time of the placement, is in the business of renting or leasing houses, residential buildings, property or real estate.

Huang Shi Hao, who holds 81 percent of Australia Hongshan Capital, is deemed interested in the shares, the filing said.

UG Technology Group and its 42 percent owner Sakamoto Tatsuo both ceased to be a substantial shareholders of CapAllianz, with their interest falling to 4.71 percent from 5.29 percent due to dilution from the placement, according to a separate filing to SGX.

Ascendas Property Fund Trustee (APFT), the manager of Ascendas India Trust, received 3.19 million units of the trust for S$1.3857 each, or a total $4.42 million on 14 February, as part of the management fees, taking its stake to 6.06 percent from 5.81 percent previously, according to a filing to SGX Monday.

Chiang Chang Jopy, the CEO of Keppel Infrastructure Trust‘s manager, was awarded 333,333 units of the trust under the restricted unit plan, subject to time conditions, according to a filing to SGX Tuesday.

Temasek: These are the big themes in our agriculture and food investments

Crude oil seen higher in Asia ahead of IEA report