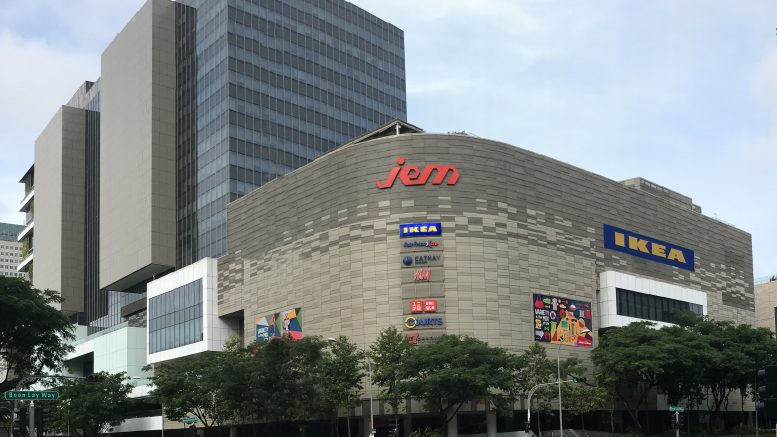 This item was originally published on Tuesday, 15 February 2022 at 1:07 a.m. SGT; it has since been updated with more details.

Lendlease Global Commercial REIT (LREIT) has entered a deal to acquire the 68.2 percent interest in the Jem property it doesn’t already own for S$2.08 billion, the REIT said in a filing to SGX late Monday.

The purchase price is an around 0.3 percent, or S$7 million, discount to the property’s appraised value, the filing said.

Lendlease Global Commercial REIT said it planned to partially fund the deal via an equity fund raising, which may include a private placement of new units to institutional and other investors and/or a non-renounceable preferential offering of new units to existing unitholders.

The REIT said it would issue up to 1.27 billion new units under the equity fund-raising.

The remainder of the deal’s consideration will be funded via promissory notes issued to one of the sellers, issuing consideration units to Lendlease International (LLI), debt financing and/or the issuance of perpetual securities and/or cash reverses and internal resources, the filing said.

LLI is a direct, wholly owned subsidiary of Lendlease Corp., the REIT’s sponsor.

The acquisition is expected to provide 10.5 percent accretion to the distribution per unit (DPU), based on a fiscal first half of 2022 pro forma estimate, the filing said.

On a pro forma basis, the enlarged portfolio would have been expected to boost 2021 net property income to S$147.8 million, from S$56.9 million, the filing estimated.

The acquisition of Jem will be carried out in two steps. Under the deal, Lendlease Global Commercial (SGP), or SingCo, will acquire all of ARIF3 for S$116 million in an all-unit deal, with the number of new units expected to be 142 million, the filing said.

The second step is for the REIT to acquire the property directly from the sellers, the filing said.

The REIT said the property would allow it to reduce asset concentration risk, and would increase its exposure to the resilient suburban retail sector to 46.8 percent from 16.3 percent before the deal.

“The property has a committed occupancy of 100 percent and boasts quality tenants with a well-balanced tenant mix. Some of its top tenants include IKEA, FairPrice Xtra, Cathay Cineplexes and Don Don Donki, amongst others. Furthermore, its office component is fully leased to the Ministry of National Development of Singapore,” the REIT said.

“Benefiting from a 30-year master lease with a rent review of every five years with Singapore’s Ministry of National Development, Jem’s office component will provide a strong and stable cashflow to unitholders,” LREIT said.

Read more about the acquisition.