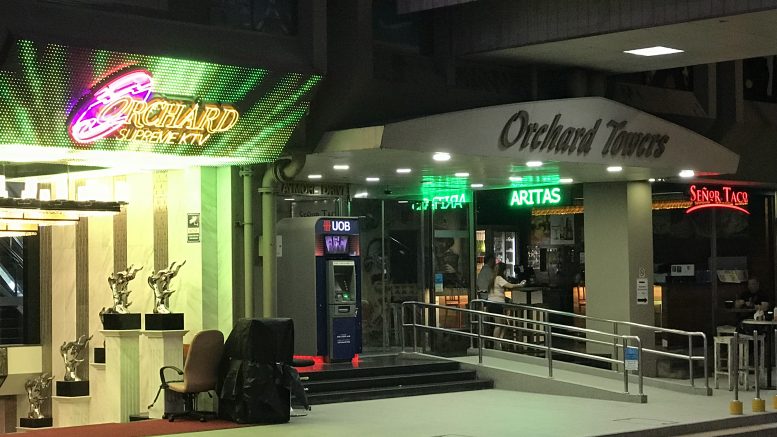 Hiap Hoe warned Friday that there was no certainty a mooted S$1.6 billion en bloc sale of the storied Orchard Towers mixed-use property would succeed.

An en bloc sale is a collective sale of multiple units of property; in Singapore, when a development is sold en bloc, the buyer usually plans to demolish the existing property and re-develop. The owners are typically paid a sizeable premium in an en bloc sale, but a super majority of at least 80 percent must agree to the sale and later to the purchase price at extraordinary general meetings (EGMs).

“Shareholders are advised that there is no certainty that the requisite consent of at least 80 percent will be obtained at the EGM, or the collective sale of Orchard Towers will proceed or be completed,” Hiap Hoe said.

Orchard Towers has been both famous and infamous in Singapore.

Often referred to as “four floors of wh***s,” Orchard Towers is a red-light district situated amid the tony Orchard Road shopping belt, surrounded by ultra-luxury condos and a nearby country club.

This wouldn’t be the first time rumblings have emerged about taking the property en bloc, but the interest from owners may be different this time.

The commercial segments of the development had focused on offering clubs and bars open to the wee hours, but since 2020, restrictions to prevent the spread of Covid-19 had shuttered many outlets and limited opening hours.

Even outlets that weren’t focused on the sex trade or nightlife were often targeting typical tourist-facing businesses, such as tailors, manicurists, money-changers and travel agents, all of which have been hard-hit by the pandemic and limits on incoming travelers.

The property’s well-respected Thai restaurants — the building is located near the Thai embassy — have also endured lockdowns and bans on dining in.

In addition, the towers were completed in the early 1970s, a geriatric age for buildings in humid Singapore, indicating maintenance costs are set to rise for owners, which may make selling more attractive this time around.

In previous years, retail space in Orchard Towers has fetched rents well below those charged in surrounding properties, as both age and reputation weighed.

The collective sale committee for Orchard Towers has recommended a reserve price of S$1.6 billion for the property and the unit owners will conduct an extraordinary general meeting (EGM) on 18 February, Hiap Hoe said in a filing to SGX. That pricing was originally reported in a Business Times article.

In 2019, property and technology investor Alexander Karolik Shlaen, an economist and CEO of Panache Management, a luxury brands and investment adviser, told Shenton Wire that he was skeptical that once Orchard Towers was demolished in any en bloc sale, it would be resurrected as a red-light district.