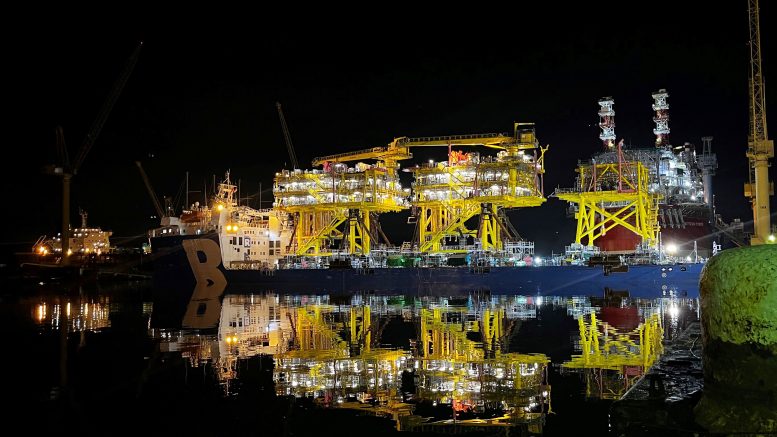 Mapletree Logistics Trust said Monday it has no plans to merge with Mapletree Industrial Trust, saying there was “no compelling reason” for a deal.

The Ascott Ltd., a wholly owned lodging subsidiary of CapitaLand Investment, secured 15,100 units across 72 properties globally in 2021, marking five straight years of record growth despite headwinds from Covid-19, the company said in a filing to SGX Monday.

Sembcorp Marine has delivered two wellhead topsides, one riser topside and two bridges to TotalEnergies EP Denmark and the Danish Underground Consortium (DUC) for the Tyra Field in the Danish North Sea, the Singapore-listed company said in a filing to SGX Monday.

ComfortDelGro has entered a deal to acquire 90 percent of Ming Chuan Transportation, one of Singapore’s largest wheelchair transport service providers, for S$8.5 million, the land transport company said in a filing to SGX Monday.

ESR-REIT has entered a deal to divest its general industrial property at 28 Senoko Drive in Singapore to Tat Seng Packaging for S$12 million, the REIT said in a filing to SGX Monday.

Chemical Industries (Far East) alleged Monday its former general manager, Benjamin Lin, who is the grandson of the managing director, has disrupted the company’s use of the cil.sg domain name and the company is taking legal action to regain access, including proceedings under the Singapore Domain Name Resolution Policy.

EC World REIT said Monday its Fu Zhuo Industrial property is being expropriated — or compulsorily acquired — by the government of Linping District, Hangzhou City, in China, for the development of Hangzhou’s Grand Canal National Cultural Park.

NutryFarm International said late Monday it wasn’t aware of any information, both public and not yet announced, to explain the 36.36 percent plunge in its share price Monday to S$0.14.

Geo Energy Resources said Monday it has not been affected by Indonesia’s move to revoke permits for mineral, coal and forestry businesses which failed to provide work plans, misused permits or transferred them to other parties.

The group has not received any notification of revocation of permits related to its Indonesian coal mines, and has received approval for its work plans for its coal mines, the company said in a filing to SGX.

Golden Energy and Resources (GEAR) said Monday it has not received any notifications in relation to Indonesia’s move to revoke permits for mineral, coal and forestry businesses which failed to provide work plans, misused permits or transferred them to other parties.

“The group has adhered with Indonesian regulations, provided work plans, and well exceeded its Domestic Market Obligations (DMO) requirements in respect of its key mining operations,” GEAR said in a filing to SGX.

But it added that the situation in Indonesia is still developing, and it is monitoring it closely.

The offeror will compulsorily acquire the remaining shares, Haiyi Treasure said in a filing to SGX.

IX Biopharma said Monday that as consideration for the exclusive licensing agreement for Wafermine and other products it has received an upfront fee of US$9 million, including US$3.5 million in cash, 2.57 million shares in Seelos and US$1.17 million in cash as reimbursement as the value of the Seelos shares had fallen.

Mm2 Asia said Tuesday it would launch a new non-fungible token (NFT) marketplace named Metaviva for licensed digital entertainment tokens and collectibles based on popular entertainment and media content in the region.

Mm2 and RHT Aldigi Financial Holdings have also entered a non-binding term sheet for RHT Aldigi to invest in Metaviva, the company said in a filing to SGX.

International Cement Group said Monday that out of caution, it has temporarily closed its cement plant located in Kazakhstan’s Almaty region to safeguard employees and the plant.

“At this juncture, the company is unable to quantify the extent of the financial impact of the unrest on the group,” International Cement Group said in a filing to SGX.

Azeus Systems Holdings said Monday it has received a HK$11.1 million (US$1.4 million) contract from the Hong Kong Police Force to design and develop its new staff integrity checking system over a 16-month period and to handle the system’s maintenance and support for five years.

Hyphens Pharma said Monday it launched its WellAway e-pharmacy as a Health Sciences Authority (HSA)-registered digital platform for patients to receive e-prescriptions from a medical doctor and have the medicine delivered.