Geo Energy Resources said Monday Indonesia’s Ministry of Energy and Mineral Resources (ESDM) notified the company on 31 December it would temporarily ban coal export sales for the month of January.

“This export ban is temporary and will not affect the group’s overall 2022 Rencana Kerja Anggaran Biaya (Work Plan and Budget) production
quota and production plans,” Geo Energy said in a filing to SGX.

The company said ESDM stated the month-long ban is due to concerns over critically low inventories at Indonesia’s domestic power plants, which could lead to widespread blackouts. ESDM is reviewing the temporary ban, based on the coal supply at power plants, Geo Energy said.

The company’s 2020 annual report said 66 percent of its revenue was derived from customers in China in 2020, up from 51 percent in 2019. Other customers are based in India, the Philippines, Vietnam, Korea and Pakistan, the report said. 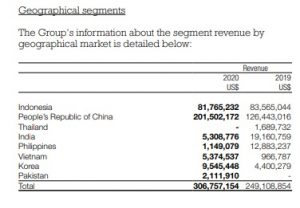 “Indonesia is currently and is expected to remain the largest supplier into the seaborne market,” Geo Energy said in its 2020 annual report, adding Indonesia and China are its core markets and that it scaled up its presence in other markets.

Indonesian seaborne thermal coal exports were forecast to grow to 442 million tonnes in 2023 from 422 million in 2020, the report said, citing a Wood Mackenzie Market report from January 2021.

The report forecast Indonesia’s domestic coal demand would grow at a 6 percent compound annual growth rate (CAGR) over 2020 to 2027.

Kalimantan accounted for 90 percent of Indonesia’s total coal production in 2020, and is set to remain the dominant supply region from 2020 to 2027, as production growth there was driven by both domestic and international demand, the report said.