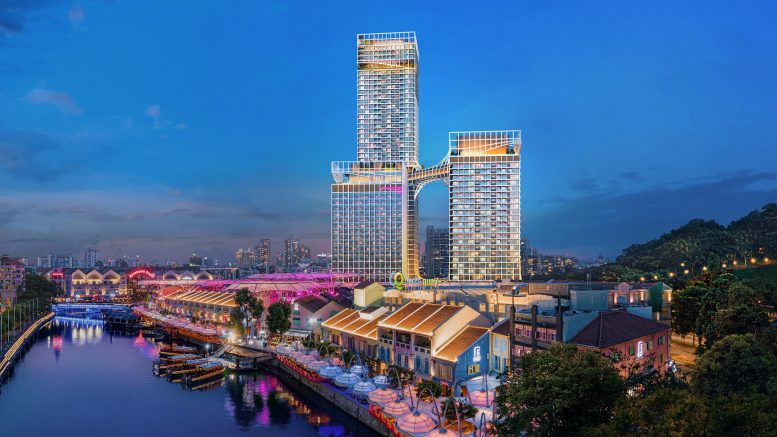 City Developments and CapitaLand Development (CLD) sold 77 percent of the units at their 50:50 joint development CanningHill Piers in the launch weekend, for a total sales value of more than S$1.18 billion, the companies said in a press release Sunday.

Out of the projects 696 units, 538 units were sold, with an average selling price of around S$3,000 a square foot, the statement said.

The 8,956 square foot super penthouse, the project’s only penthouse unit, located at level 48, was sold for S$48 million, or around S$5,360 a square foot, the statement said.

Jason Leow, CEO of CapitaLand Development, pointed to the project’s design by Bjarke Ingels Group, as well as the river and hill dual frontage and the location in Clarke Quay, a lifestyle and entertainment precinct.

The project includes one 24-storey tower and one 48-storey tower, facing Fort Canning Hill and the Singapore River, respectively, with the towers linked by a skybridge at level 24. In addition, the residential project will have a direct link to Fort Canning MRT station.

To reduce crowding at the sales gallery, City Developments used its proprietary electronic system for expressions of interest, balloting and satellite sales bookings.

CanningHill Piers is part of an integrated development including CanningHill Square, which will have food and beverage and retail outlets, a 475-room hotel operated under the Moxy brand by Marriott International, and a 192-unit serviced residence with a hotel license operated under the Somerset brand, to be managed by The Ascott, the statement said.

The project’s completion is scheduled for 2025.

Around 81 percent of the buyers were Singaporeans, with the remainder permanent residents and foreigners mainly from China, Malaysia, Indonesia, Australia, South Korea, the U.S., the U.K. and others, the statement said.