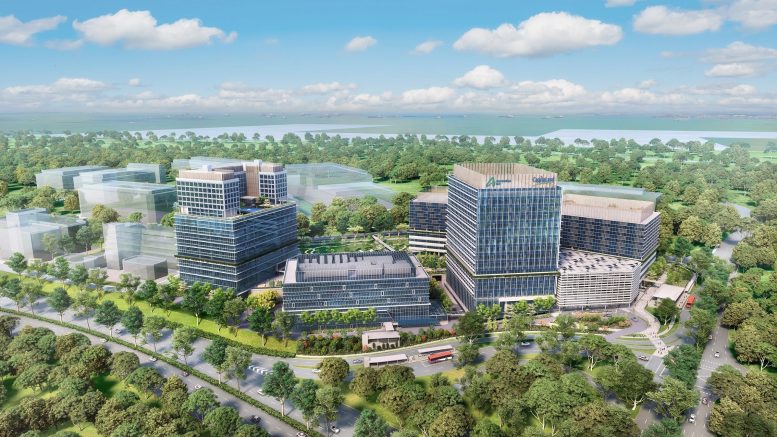 An artist's rendering of the areal view of the planned redevelopment of 1 Science Park Drive in Singapore by Ascendas REIT and CapitaLand Development (CLD). Credit: CapitaLand

The 1 Science Park re-development is a long-term catalyst, and can pave the way for around S$5.6 billion in gross development value at the REIT’s assets at Science Parks 1 and 2, the note said.

Under the deal, Ascendas REIT sold the property to the joint venture for S$103 million, which the REIT will hold around 34 percent of, while CLD, the development arm of CapitaLand Group, will hold the remainder.

DBS said the deal structure, which means Ascendas REIT will only benefit from its 34 percent stake in the redevelopment, will also limit the REIT’s risks.

“The total development cost of S$883 million is a significant exposure for AREIT over the next 3.5 years. On the other hand, the proceeds from the divestment of the existing property into the SPT [special purpose trust] will fund the bulk of its stake in the joint venture and minimise the need for further debt,” DBS said.

“With its foot into the ongoing rejuvenation of the Science Park 1 precinct, we believe this opens the door for AREIT to potentially acquire other properties from its sponsor,” DBS added, noting Ascent and 5 Science Park Drive were redeveloped fairly recently and will be nearing stabilisation.

“This gives AREIT the opportunity to deploy its capital into immediately income-producing and stabilised assets, while leaving an option to acquire the remaining 66 percent stake in 1 Science Park Drive when it is completed,” the note said.

DBS kept a Buy call on the REIT with a S$4.00 target price, and pointed to its around 5.2 percent yield.

“We believe that investors have neglected A-REIT’s myriad of structural tailwinds from e-commerce, datacenters and office decentralisation, which would drive earnings and capital values higher in the longer term,” the note said.