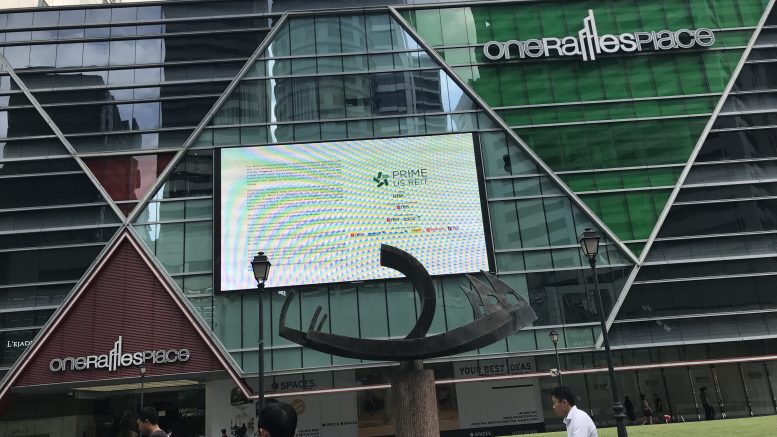 KBS REIT Properties III sold 73.72 million Prime US REIT units in an off-market block trade at US$0.814 a unit, taking its stake to 18.5 percent from 24.8 percent previously, according to a filing to SGX Friday.

In a separate statement filed to SGX, Prime US REIT’s manager said the block trade wasn’t a corporate action and didn’t involve a new equity fundraising by the REIT, adding the deal was independent of the manager.

“The manager understands from the seller that the block trade was executed based on public information. The manager also confirms that it is not aware of any material non-public information which may have prompted this trade,” KBS US Prime Property Management, the REIT’s manager, said in the statement, adding the increased free float of Prime’s units could increase liquidity ahead.

The manager released a statement from KBS REIT Properties III:

KBS REIT Properties III is a wholly owned subsidiary of KBS Limited Partnership III, which is deemed interested in the units, the filing said.

The filing said Bank of America Singapore was the sole financial advisor to KBS REIT Properties III on the deal.

Bruno de Pampelonne has acquired 150,000 units of IREIT Global at S$0.65 each in a market transaction, taking his stake to 0.06 percent from 0.05 percent previously, according to a filing to SGX Friday.

Bruno de Pampelonne is non-executive director of IREIT Global Group, which is IREIT Global’s manager, and chairman of Tikehau Investment Management, which jointly owns the REIT’s manager with City Developments.

Zheng Ze Li became a substantial shareholder of Ntegrator, acquiring 102.05 million new shares for S$836,810 in a share placement deal, giving her a 7.16 percent stake, according to a filing to SGX Friday.

In addition, Han Meng Siew, listed as executive chairman on the company website, saw his stake in Ntegrator fall to 1.96 percent from 2.23 percent previously due to dilution after two share placements, a separate filing said.