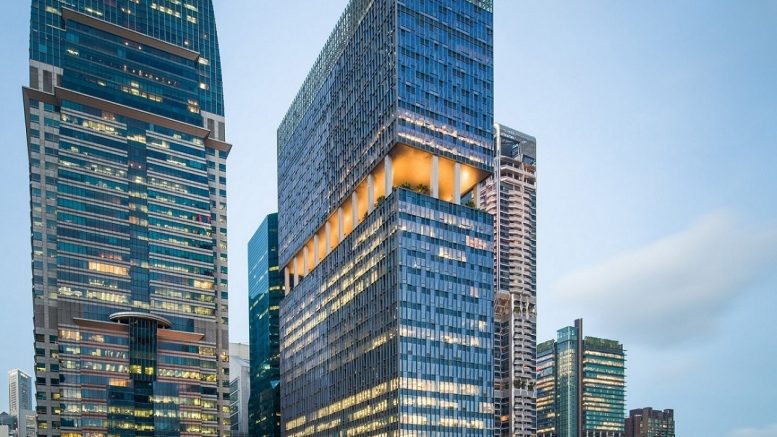 CLI’s portfolio of assets include new economy assets in its core markets of Singapore, China and India, such as Grade A office developments Capital Tower and 79 Robinson Road (pictured). Credit: CapitaLand

This item was originally published on Saturday, 18 September 2021 at 23:11 SGT; it has since been updated to include Roxy-Pacific Holdings, Singapore Myanmar Investco (SMI) and Hatten Land. The item on CapitaLand and CapitaLand Investment has also been updated.

CapitaLand Investment (CLI) made its trading debut Monday as one of the world’s largest listed real estate investment managers (REIMs), marking a major step in the restructuring of storied property developer CapitaLand.

Sembcorp Marine said Friday it received applications for around 117.7 percent of the 18.83 billion rights shares offered as a move to raise around S$1.5 billion in a Temasek-backed offering.

OUE said Friday the issue size of its 3.5 percent notes due 2026 would be increased to S$200 million from the proposed S$150 million in view of additional investor demand.

TKL & Family has made a bid to take Roxy-Pacific Holdings private at S$0.485 a share, in a pre-conditional voluntary general offer for all of the  property and hospitality company’s shares, according to a filing to SGX early Monday.

Lendlease Global Commercial REIT said Friday it has completed the acquisition of 43,070 shares, or a 9.6 percent stake, in Lendlease Asian Retail Investment Fund 3 (ARIF3) from a third-party seller for a total cost, including management fees, of around S$85.6 million.

After the completion, the REIT holds a 16.6 percent interest in ARIF3 and an effective 25.7 percent indirect interest in the Jem property at Jurong Gateway Road in Singapore, the REIT said in a filing to SGX.

Lim Wee Kian, a non-independent non-executive director and major shareholder of IFAST Corp., saw his deemed interest in the company fall to 3.941 percent from 3.945 percent previously after the disposal of 10,900 shares in a market transaction for S$108,891, according to a filig to SGX Friday.

Lim is deemed interested in shares registered in the name of DBS Nominees and his spouse, Chang Foong May, and the change of interest was due to his disposal of shares via DBS Nominees on Thursday, the filing said.

Darco Water Technologies emphasized Friday it has not yet reached a decision on whether it would proceed with an investment in the Gaoyi project, citing outstanding information needed from Wang Zhi and expected by end-September.

Read more: Darco: No decision reached on whether to proceed with Gaoyi project

Spackman Entertainment Group said Friday the decision to divest its Zip Korea unit, despite its theatrical success, was in part due to the theatrical film business facing a declining trend.

The group had issued convertible bonds amounting to S$11 million in January 2019, and since then an aggregate S$3.95 million of the bonds had been converted into shares in 2020, Clearbridge Health said in a filing to SGX.

“The partial early redemption allows the group to reduce its interest payment obligations arising from the convertible bonds, while the extension provides financial flexibility to the group for expansion of its business, which may be undertaken by way of organic growth or through investments, joint ventures, strategic collaborations, and mergers and acquisitions,” the company said in the filing.

Singapore Myanmar Investco (SMI) said Sunday it has entered a non-binding memorandum of understanding (MOU) with Hatten Technology, a subsidiary of Hatten Land, to explore cryptocurrency mining opportunities in Malaysia.

Hatten Land said Friday payment for the proposed divestment of subsidiary Gold Mart to Tayrona Capital Group has still not been received, with the completion date already being re-extended several times, with the delay attributed to financial institutions requiring substantial documentation t approve the cross-border payment, exacerbated by the pandemic situation.

“Tayrona had provided assurance to management that notwithstanding the long delay, they remain keen and committed to completing the proposed transaction and have communicated that they are close to resolving the issues,” Hatten Land said in a filing to SGX. “However, the exact timing cannot be reasonably ascertained at this point of time. The board and management have assessed the situation and are of the view that it is in the best interests of the company and its shareholders to afford more time to Tayrona to fulfil its obligations.”

Megachem’s 36.19 percent owned associated company Megachem (Thailand) has agreed to acquire 55 percent of Green Leaf Chemical for 82.5 million baht, or around S$3.37 million, the company said in a filing to SGX Friday, adding the deal will be funded in cash from internal funds.

The acquisition will give Megachem an effective around 19.9 percent interest in Green Leaf Chemical, which imports and distributes chemicals for manufacturing cosmetics and nutraceuticals, the filing said.

“The proposed acquisition by Megachem Thailand will enhance the group’s product portfolio and deepen our coverage of the personal care industry thereby strengthening our market position. We will also seek to derive synergistic value to deliver better customer propositions,” Megachem said in the statement.