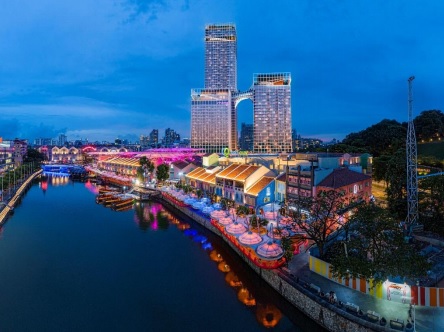 This item was originally published on Thursday, 19 August 2021 at 12:40 a.m. SGT; it has since been updated to include an item on CapitaLand and City Developments, and Shanaya.

CapitaLand and City Developments have launched their residential CanningHill Piers development located along the Singapore River near Clarke Quay, with a link to the Fort Canning MRT station, the two property developers said in a press release Thursday.

The two residential towers, which will have a total of 696 units and will be connected by a sky bridge, are part of a four-tower mixed-used development, with the other towers including a serviced-residence and hotel offering, the statement said. In addition, the towers will include a commercial component, named CanningHill Square, with food and beverage and retail outlets.

Read more about the development.

Lippo Malls Indonesia Retail Trust said Wednesday 12 of its malls in Jakarta and other major cities in Java and Sulawesi would be allowed to reopen, subject to precautionary measures, as Indonesia relaxed some of the restrictions aimed at stemming the spread of the Covid-19 virus.

Read more: LMIR Trust to reopen 12 of its malls as Indonesia eases some Covid restrictions

Lippo Malls Indonesia Retail Trust has obtained a committed S$30 million revolving loan facility from Barclays Bank PLC to be used for working capital requirements and/or repayment of any existing financial indebtedness, the trust said in a filing to SGX Wednesday.

Nanofilm Technologies issued explanations Wednesday to address concerns raised by analysts and investors after its first half earnings release and the resignation of its chief operating officer, not long after its CEO stepped down, spurred an as much as around 36 percent share price drop earlier this week.

Tuan Sing Holdings has been awarded a private tender for the 870 Dunearn Road freehold site in Singapore for S$56 million, the property developer and investor said in a filing to SGX Wednesday.

The deal will be financed with internal funds, the filing said.

Read more about Tuan Sing’s tender for the property.

CapitaLand Group CEO Lee Chee Koon acquired 50,000 shares in the company at S$3.96 each in a market transaction, bringing his total holding to a 0.03 percent stake, or around 1.54 million shares, the company said in a filing to SGX Wednesday.

Shanaya Ltd., a waste-management and disposal company servicing industrial and commercial clients, began trade on SGX’s Catalist board Thursday after completing its reverse takeover of CPH.

Mohamed Gani Mohamed Ansari, CEO and executive director of Shanaya, said in a statement the listing would position the company to access capital markets as it continues to expand operations.

StarHub CEO Nikhil Oommen Jacob Eapen accepted the award of 622,000 shares in the company, according to a filing to SGX Wednesday. Prior to the award, Eapen did not hold any shares in StarHub, the filing indicated.

Dyna-Mac Holdings CEO Lim Ah Cheng acquired 1.815 million shares in the company due to the vesting of share awards, the company said in a filing to SGX Wednesday. Prior to the award, he did not hold any ordinary shares, the filing said.

Before the award, Lim held up to 5.445 million contingent award options, and afterward, he holds up to 3.63 million, the filing said.

“The company wishes to put on record that Ms. Ng’s resignation is not in any way connected with or a result of the ongoing independent review on the company,” Spackman said in a filing to SGX. “After having been with the group for over five years, Ms. Ng has decided to pursue other opportunities for the purpose of career development and advancement. Further, there are no disagreements between Ms. Ng and the company’s audit and risk management committee as well as the board on the practices that may have had an impact on the company’s financial reporting.”

Accrelist will raise up to S$3.38 million via a proposed placement of shares and the issue of warrants to six investors, the medical aesthetics clinic operator said in a filing to SGX Wednesday.

The placement of 22 million shares will be at S$0.07371 each, a discount of 10 percent over the volume weighted average price of the shares on Monday, while the issuance of 22 million warrants will be on the basis of one per placement share, with an exercise price of S$0.08, the filing said.

“The proposed placement is intended to enhance the group’s working capital, enabling Accrelist to capitalise on growth and expansion opportunities amidst rising demand for medical aesthetics services,” the company said.