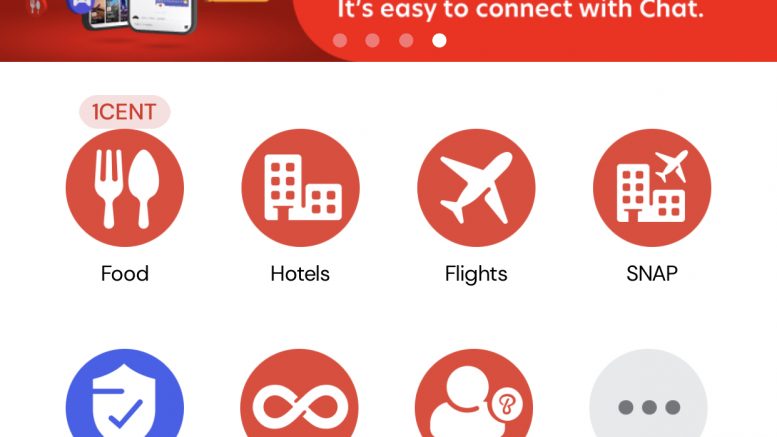 A screenshot from AirAsia's super app in Singapore

“We believe that we have different ways, different channels of creating demand. And we believe we can be profitable quite quickly, Fernandes said. “We believe that using our data, using our brand, and being very specific, we can build some very nice niches that are cashflow positive and profitable.”

The super app is a largely Asian phenomenon of offering a single app to access a variety of bundled services – such as Grab’s app, which offers ride-hailing, food and package delivery and some financial services. Grab has also received a digital banking license in Singapore.

KPMG, in a 2019 report titled “Super app or super disruption,” noted that in Indonesia, super apps Grab and Go-Jek have built their acceptance in part on a largely unbanked population’s need for basic financial services, even finding ways to turn their ride-share drivers into mobile bank tellers.

In Southeast Asia, the super app field is already crowded with giants: In addition to Grab, the region hosts U.S.-listed Sea, which owns e-commerce play Shopee and game-maker Garena and is set to develop a digital bank in Singapore. In addition, ride-hailing unicorn Go-Jek merged in May with e-commerce player Tokopedia.

Lockdowns to stem the spread of the Covid-19 virus spurred strong digital adoption in Southeast Asia, amid the need to develop new ways to access goods and services. Around 40 million new Internet users were added in Southeast Asia in 2020 alone, up from 100 million new users added in 2015-2019, bringing 70 percent of the region’s population online, according to the e-Conomy 2020 SEA 2020 report from Google, Temasek and Bain & Co. The report was published in November 2020.

But Fernandes said he was undaunted by the competition, noting AirAsia started with only two planes and never had the venture capital backing, such as from SoftBank’s Vision Fund, offered to Southeast Asia’s super app unicorns. Fernandes referred to the super apps’ funding as “big sugar daddies.”

“In terms of competing, there is still a huge market; this isn’t a zero-sum game. There’s going to be many people who can fit into different places,” he said. “We have a slight advantage: A lot of good work has been done by a lot of these super apps. And we can pick and choose and kind of build a model much quicker and much cheaper.”

Fernandes added that the airline carried 90 million passengers pre-Covid, and that created a pool of “very rich data” to analyse.

One of the digital businesses, logistics, has “massive growth potential” as the growth of e-commerce and cross-border commerce will allow the carrier to become the quickest delivery option, he said.

AirAsia has said its digital product lines include food, groceries fresh produce and cosmetics in addition to travel-related offerings.

The airasia fresh service, which provides fresh and frozen food from the supplier, also allowed local farmers and agricultural suppliers to offer their products, ensuring demand even during lockdowns, the carrier’s annual report said.

For the fourth quarter of last year, the digital businesses accounted for 42 percent of group revenue, the carrier’s annual report said.

AirAsia attributed the ebitda loss to ramping up offerings while lacking major revenue contribution from airlines; the carrier launched airasia food in Singapore during the quarter, and expanded to Penang.

AirAsia said Big Pay’s revenue declined on-year on lower new customers as it limited marketing spend during the pandemic, but it added that revenue rose 5 percent on-quarter on higher payment and remittance revenue.

BigPay, which launched in Singapore in September 2020, lets users in Malaysia and Singapore send money to bank accounts in 10 countries, and it has added bill payment and insurance products.

SATS upgraded to Add by CGS-CIMB after earnings beat expectations