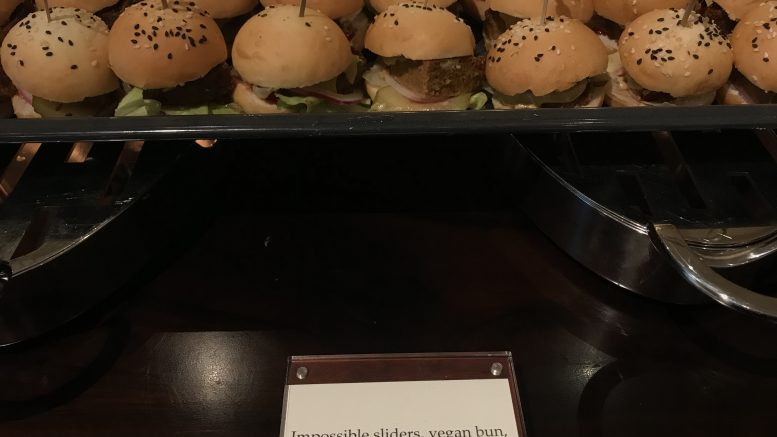 Impossible Foods has a plan for launching its plant-based alternative to meat in Asia’s markets: It’s taking aim at the region’s traditional dishes.

“We would look to see where we could tackle the local culture and and the local cuisine and provide great culinary experiences to prove that it’s a really high quality meat made from plants,” Nick Halla, senior vice president for international at Impossible Foods, said at the Asia-Pacific Agri-Food Innovation Week in Singapore last week.

Halla said consumer interest has been “very high,” as has been repeat interest. He added that Impossible has been trying to tap into local culture, seeking to include dishes such as dumplings and skewers.

After launching in Singapore in March, Impossible’s meatless meat is now available in more than 250 restaurants in the city-state, he said.

Impossible is also targeting China, and Halla said he expected the market — which consumes 28 percent of the world’s meat currently — would welcome the product.

Halla said his company served 50,000 samples at a trade show in China earlier this month.

“What surprised me is the awareness of the meat from Impossible,” Halla said. “It was like a no-brainer to everybody coming through … a lot places we go it’s like ‘why are you here, why are you doing this, why would we want this’. [In China,] everybody that was waiting in line for Impossible was like ‘this is where we have to go as a nation because we don’t have enough protein to feed us.’”

When it comes to Asia’s other large market — India — Halla said Impossible didn’t have a timeline for entry, noting the region’s meat consumption was lower than other markets and the subcontinent posed other nutritional challenges.

Singapore state-owned investment company Temasek has been investing in Impossible Foods at least since 2017.

David Yeung, founder social startup Green Monday in Hong Kong, pointed to other developments in China which could spur faster adoption of meat-alternatives, such as the outbreak of African swine fever which was “decimating the animal protein supply.”

“With the plummeting meat, particularly pork, supply in multiple countries in Asia, I think that really set the alarm to everyone,” Yeung said in a panel discussion at the conference.

“With so many countries and cultures and languages, and legislations, that part is difficult. So whatever success that happens in Japan, that can not be translated to Thailand, what happens in Taiwan doesn’t translate to Singapore,” Yeung said.