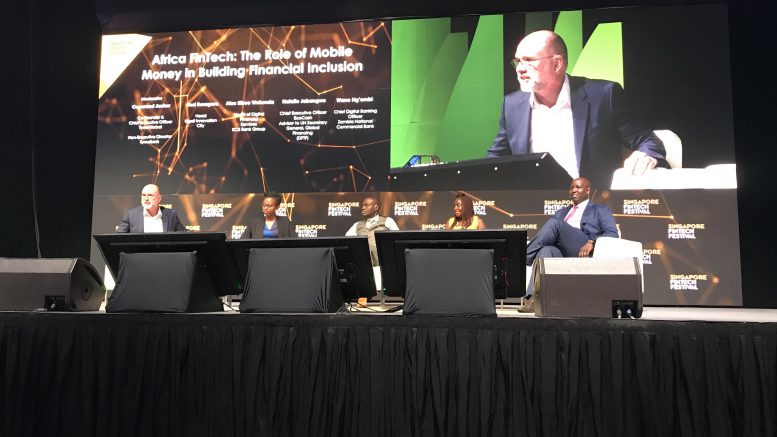 Upstart fintechs’ entry into financial services hasn’t set up a fixed battle with the established banks in Africa. Quite the contrary, in fact.

That was one of the messages from Wane Ng’ambi, chief digital banking officer at Zambia National Commercial Bank.

“It’s becoming very clear that to deliver efficient services, no single institution can deliver a single [comprehensive] product. I think the key theme that’s becoming clearer across the region, is there’s a lot of collaboration that’s currently happening between mobile money players, between banks, between fintechs,” Ng’ambi said at the Singapore Fintech Festival last week.

“The idea is that everyone owns a specific area of expertise,” he said. “You don’t really have to solve every vertical.”

Ng’ambi was speaking on a panel called “Africa fintech: The role of mobile money in building financial inclusion.”

Tesi Rusugara, head of Kigali Innovation City (KIC) in Rwanda, said that’s exactly what her project is trying to do.

KIC, which is home to Carnegie Mellon University’s Africa campus, is a technology cluster aiming to attract both domestic and foreign investment to spur innovation on the continent. The space will eventually host four international universities as well as companies focused on financial services, health care and agriculture.

Ng’ambi also pointed to the importance of working closely with regulators, citing as an example, his bank’s need to access customers’ data before they apply for a loan.

“The context is if I don’t have the data to score, I can’t build a product, because that’s the way the product works,” he said, adding the bank was able to reach a middle-ground with regulators.

Creating better products and services can be importance to increasing financial inclusion in emerging markets.

Having a bank account is considered crucial to reducing poverty. In Zambia, as of 2017, 45.9 percent of people aged 15 and above had an account, up from 21.4 percent in 2011, according to the World Bank’s Findex report for the country; around 35.8 percent had a financial institution account, while 27.8 percent had a mobile-money account, the report said.

That compares with sub-Saharan Africa, where 42.6 percent of people aged 15 or higher have an account, with 32.8 percent of those in that age group having a financial institution account and 27.8 percent having a mobile-money account, the report said.

But many industry players have begun to define financial inclusion as more than just having a bank account, arguing that true inclusion includes access to credit, insurance and other appropriate financial products.

Other countries in Africa have also shown the importance of fintechs stepping in where banks can’t. In Zimbabwe, for example, the success of fintech EcoCash was driven in part by the failures of the banking system.

In 2011 — the year EcoCash was founded — the Reserve Bank of Zimbabwe put ReNaissance Merchant Bank under curatorship when its founders allegedly misappropriated depositors’ funds for insider loans and to finance directors’ lavish personal lives, according to a 2012 Al Jazeera piece. Within, six months, 13 of the country’s 25 financial institutions ended up under curation, liquidated or administrated by the Reserve Bank of Zimbabwe, the Al Jazeera report said.

“When that small segment of the formal financial services breaks down, you have a whole country broken down. And for you to be able to rebuild it, technology gave us the opportunity to include everybody so that the broad base of national deposits could actually be lifted up,” Natalie P. Jabangwe, CEO of EcoCash, said.

She said 90 percent of adults in Zimbabwe are now financially included, thanks to EcoCash, although that figure doesn’t match the Findex report.

According to the Findex report, 55.3 percent of people aged 15 or older in Zimbabwe had an account as of 2017, up from 39.7 percent in 2011. Around 28.2 percent of people aged 15 or older had an account at a financial institution as of 2017, while 48.6 percent had a mobile money account, the Findex report said. More than 52 percent had made a digital payment in the past year, it found.

Jabangwe said EcoCash started with a relatively simple service, moving money from one place to another, or basic peer-to-peer services.

“We realized that as an innovative platform, we had a responsibility for ecosystem building. This was not just about offering convenience. So we started introducing other use cases, like merchant payments and beyond merchant payments, we introduced savings and today [we have] the largest base of savings in the country,” she said.

EcoCash had 6.64 million active mobile money subscriptions in the second quarter of this year, up 5.2 percent from the first quarter, according to data from the Postal and Telecommunications Regulatory Authority of Zimbabwe (Potraz). The country’s population was around 16.53 million, as of 2017. EcoCash had a 99.6 percent market-share of mobile-money transactions, the data showed.

But while EcoCash was founded in part as a response to the country’s hyperinflation, the mobile-money platform sometimes also can help perpetuate it.

Many merchants and transportation operators in the country will only accept cash — something Zimbabwe is chronically short of. Merchants who want to accept electronic payments aren’t able to do so during Zimbabwe’s frequent power outages.

That has meant that when EcoCash’s customers go to agents to make cash withdrawals from their accounts, the agents often take large commissions of as much as 50 percent. That effectively devalues electronic funds, spurring on the country’s inflation — which clocks in at the world’s highest at more than 300 percent on an annual basis.