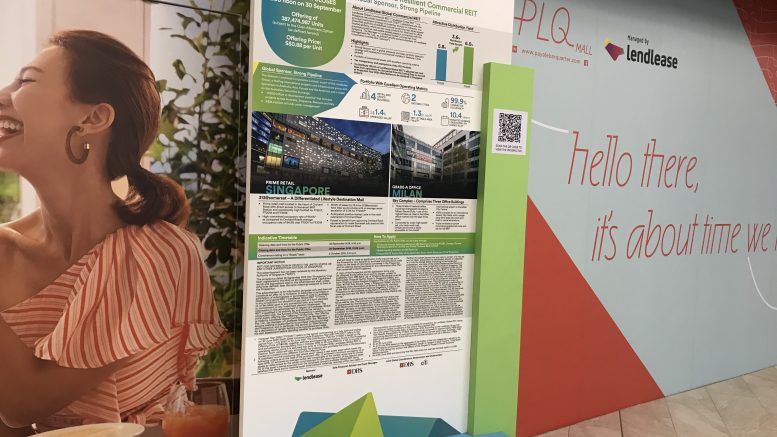 Lendlease Global Commercial REIT posted a strong trading debut, ending Wednesday up 4.54 percent at S$0.92, compared with the IPO price of S$0.88, but off the day’s high of S$0.945.

Around 74.6 million of the REIT’s units changed hands, making it SGX’s most-traded REIT for the day by both volume and value, Lendlease Global Commercial Trust Management, the REIT’s manager, said in a statement filed to SGX. The strong volume came despite the REIT not beginning trading until 2:00 P.M. SGT, at the start of the afternoon session.

“We are pleased that Lendlease Global REIT has been well received by investors. Our strong debut performance reflects the market’s appreciation of our attractive value proposition backed by a distinctive portfolio of quality assets located in two gateway cities,” Tony Lombardo, chairman of the manager, said in the statement.

“With access to our sponsor’s extensive development pipeline in gateway cities across the world, we are confident in our global capabilities to support the success of the REIT,” Lombardo added.

“S-REITs has been one of the top institutional net buy sectors the first eight months of this year, attracting S$211 million of inflows. The sector’s solid performance is an indicator of strong institutional and retail interest,” Ismail said in the statement.

The listing brought the number of SGX-listed REITs and property trusts to 45, with a combined market capitalization of around S$110 billion, SGX said in a statement.

The offering of 22.73 million new units to the public in Singapore received valid applications for 330.44 million units, or around S$290.8 million, representing a subscription rate of 14.5 times, the highest for a REIT IPO in five years, the REIT said.

Indications of interest for the placement tranche offered to institutional and other investors in Singapore represented a subscription rate of 9.9 times, excluding the LLT Sub-Trust, cornerstone investors and 13 million units reserved for employees, the filing said.

Overall, the placement tranche, the public offering and the reserve units had total subscriptions valued at around S$3.35 billion, and it was 9.8 times subscribed, Lendlease Global Commercial REIT said.

In all, the offering had 1.17 billion units, raising gross proceeds of around S$1.03 billion, the REIT has said previously.