Mapletree Commercial Trust units dropped as much as 4.66 percent in early trade Friday after the REIT announced it would acquire Mapletree Business City (Phase 2) from Mapletree Investments for S$1.55 billion.

The drop was likely due at least in part to the deal’s planned financing, which will include issuing up to 500 million new units in an equity fund-raising as well as new loan facilities of up to S$800 million.

The structure, timing and pricing of the equity fund-raising — which will include a private placement and a preferential offering — haven’t yet been determined, the trust said, but it added the issue price wouldn’t be at a more than 10 percent discount to the volume weighted average price for the market day when the underwriting agreement is signed.

Mapletree Commercial Trust said the acquisition was expected to increase the units’ free float by 14.4 percent. 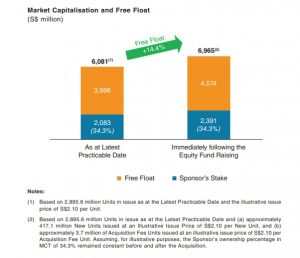 A chart of the potential impact of Mapletree Commercial Trust’s proposed equity fund-raising on its free float and market capitalization, from the REIT’s circular on its planned acquisition of Mapletree Business City (Phase 2).

Soilbuild REIT: NK Ingredients in default of lease after July payment not received