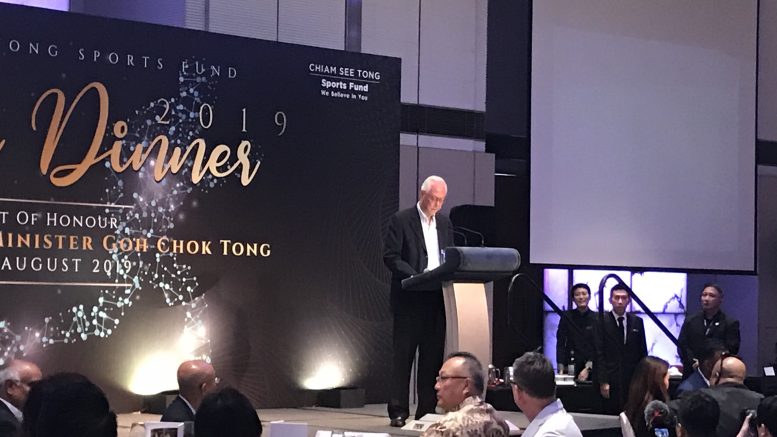 It’s an unusual step in a country where the ruling PAP political party has historically sometimes had a testy relationship with opposition politicians.

“I’m sure some of you might be surprised why I’m here because Chiam and I were on opposite sides in parliament. I was surprised myself to receive the invitation,” Goh said at the dinner.

But Goh’s comments may be part of a larger pattern of remarks from Singapore’s leaders as they navigate a world where the rules-based global systems which have been so beneficial to the city-state are facing threats. Indeed, support for civility in politics and dispute resolution, as well as the global trade system, was a recurring theme last year, when the city-state hosted the Association of Southeast Asian Nations summit.

Chiam was Singapore’s longest-serving opposition politician, representing the Potong Pasir constituency in Parliament from 1984 to 2011. A wheelchair-bound Chaim, who has reportedly suffered two strokes, made a brief appearance during the evening.

“I support the Chiam See Tong Sports Fund also because I respect Chiam as a well-meaning, decent and honest politician and member of parliament,” said Goh. “I say this sincerely.”

Goh, who was prime minister from 1990 to 2004, elaborated on his political differences with Chiam.

“Chiam entered politics not for selfish reasons or because he thought the PAP was not doing a good job. He believed that Singapore should have a two-party system like other liberal democracies, with each taking turns to run the country,” Goh said. “On the other hand, I believe a small vulnerable country like Singapore needs a strong, durable government to protect and advance the people’s interests, because I think a revolving door kind of government would do us no good.”

Singapore’s current Prime Minister Lee Hsien Loong has also recently highlighted the need for traditional diplomacy and cooperation as the city-state’s trade-dependent economy takes a hit from the U.S. trade war on China, and as it prepares for what may be as much as S$100 billion in needed spending to protect the island-nation from rising sea waters due to climate change.

In his National Day speech on 18 August, Lee highlighted that Singapore is “friends” with both the U.S. and China and “wants to remain so.”

“When we can agree with either major power, we will do so. When we cannot, we must maintain and explain our stand,” Lee reportedly said.

At the charity auction, Goh donated a signed golf club that ended with a final bid of S$5,000.

It’s unclear if the golf club was meant to have political significance, but golf has played a role in Singapore’s diplomatic relations.

After keeping kept Singapore at “arm’s length” to “show the U.S.’ displeasure” at the  caning of American Michael Fay after he was convicted in 1994 on vandalism charges, former U.S. President Bill Clinton issued an “out of the blue” invitation to Goh to play golf at the APEC Leaders meeting in Vancouver, Goh said during a 2014 lecture. Goh said he was invited to the White House the following year, according to the Straits Times.

Goh also noted the U.S.-Singapore Free Trade Agreement was conceived on a golf course during a midnight game between Goh and Clinton at the APEC leaders meeting in Brunei in 2000.