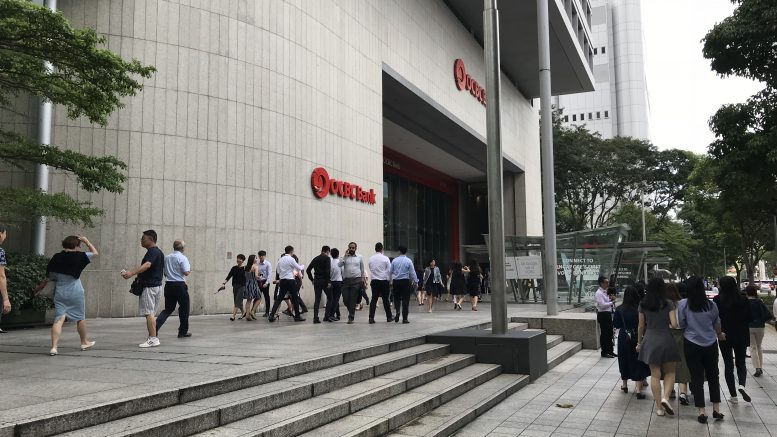 This article was originally published on Thursday, 22 August 2019 at 1:53 A.M. SGT; it has since been updated to include Yanlord Land, Spackman Entertainment and an additional item on Soilbuild REIT.

Soilbuild Business Space REIT plans to acquire a property in Adelaide, Australia, from 25 Grenfell Street Adelaide Real Estate Netherlands for A$134.22 million, or around S$127.5 million, the REIT said in a filing to SGX Wednesday.

Read more: Soilbuild REIT plans to acquire Adelaide property for around A$134 million

Soilbuild Business Space REIT has launched a preferential offering of 192.14 million new units at S$0.53 each to raise gross proceeds of around S$101.8 million, the REIT said in a filing to SGX before the market open Thursday.

OCBC is in talks with Singtel and other companies about potentially seeking one of Singapore’s planned virtual banking licenses, Bloomberg reported Wednesday, citing people familiar with the matter.

Yangzijiang Shipbuilding bought back two million shares in the market at S$0.945 to S$0.95 each, the Chinese shipbuilder said at midday Wednesday, continuing the recent spate of buybacks in the wake of the stock’s plunge.

Yanlord Land (HK), a subsidiary of Yanlord Land, has launched an offer of US$400 million U.S. dollar-denominated senior notes due 2024 priced at 6.80 percent, the Chinese property developer said in a filing to SGX Thursday.

China Jinjiang Environment said Wednesday that Zhejiang Provincial Energy Group has completed the acquisition of 430 million of the company’s shares, or a 29.79 percent stake, from China Green Energy.

Dou Zhenggang and Wei Xuefeng are now the second largest controlling shareholders, with each indirectly holding around 25.81 percent, the filing said.

Golden Energy and Resources’ subsidiary, Golden Investments (Australia) purchased 6.60 million shares of ASX-listed Stanmore Coal, or an around 2.58 percent stake, for A$9.70 million (S$9.11 million or US$6.59 million) in an off-market block deal, the company said in a filing to SGX Wednesday.

Creative Technology reported Wednesday a fiscal fourth quarter net loss of US$2.82 million, swinging from a year-ago net profit of US$25.57 million on year-earlier litigation gains and lower sales.

The Capital Group Companies’ (CGC) deemed interest in Yoma Strategic fell to 5.943 percent from 6.077 percent after the disposal of 2.54 million shares at S$0.3312 each in a market transaction, CGC said in a filing to SGX Wednesday.

Spackman Entertainment Group said Thursday its film, “Jesters: The Game Changers,” made its debut at No.3 at the South Korean box office after its release on 804 screens Wednesday, grossing US$591,383 in box office revenue.

The historical comedy, which had 18 percent of the nationwide box office market share Wednesday, was directed by Kim Joo-ho and starred Cho Jin-woong and Son Hyun-joo, Spackman said in a filing to SGX; the film was produced by newly acquired Simplex Films, the filing said.

“Starting with ‘Jesters: The Game Changers,’ Simplex Films is set to add a healthy pipeline of quality films to the group’s movie production business,” Spackman said in the filing.

Hercules’ takeover bid for Hupsteel has been declared unconditional as shareholder acceptances have reached 90.013 percent, OCBC Bank, acting for Hercules, said in a filing to SGX Wednesday.

The closing date for the offer has been extended to 13 September from 30 August, the filing said.

Hercules does not intend to preserve Hupsteel’s listing status now that its free float will fall below 10 percent, and it will compulsorily acquire the remaining shares, the filing said.

Asiatravel.com said Wednesday it is in the process of restarting its business operations and preparing documents to be proposed to creditors under a scheme of arrangement.

The troubled travel booking site said in a filing to SGX it would provide updates when there are material developments.