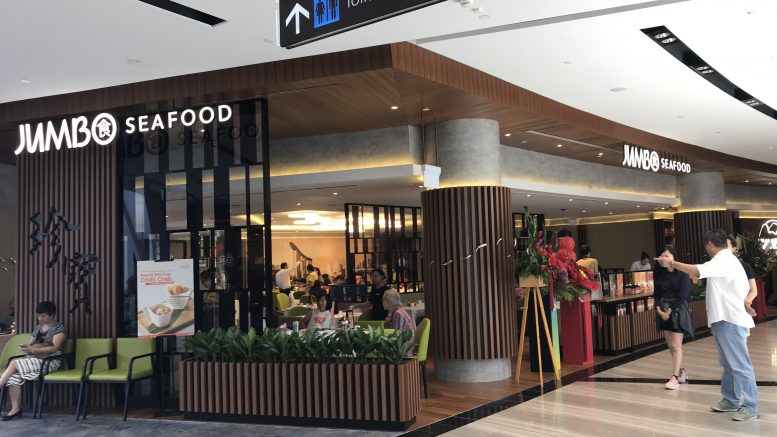 Revenue for the quarter ended 30 June rose 0.8 percent on-year to S$36.37 million, the Singapore chili crab purveyor said in a filing to SGX.

Improved contributions from franchise income and from the Singapore operations on the opening of three new restaurants in the quarter — JUMBO Seafood at Jewel Changi Airport, Zui Yu Teochew Cuisine and Chao Ting Teochew Pao Fan at Far East Square — were offset by the four-week closure of the JUMBO Seafood outlet at Singapore’s The Riverwalk for renovation, the company said.

“We are heartened that our new restaurants/outlets that commenced operations this quarter have been well received, and aim to continue this momentum to prudently expand our network in Singapore and across Asia,” Ang Kiam Meng, CEO and executive director of JUMBO, said in the statement.

JUMBO’s first franchised seafood outlet in Seoul, South Korea, opened to a good reception, he said, and raised the total number of JUMBO Seafood outlets in Asia to 18.

For the results of its affiliates, JUMBO reported a loss of S$300,000 for the quarter, swinging from a year-ago profit of S$65,000, on a weaker performance from the Taiwan-based JUMBO Seafood outlets, the filing said.

JUMBO expects the food and beverage sector to remain challenging as a result of operating cost pressures and competition. “While these are industry-wide challenges,” the company said, “[it] believes that it will be able to navigate these challenges and remain confident that the business will remain stable in the next 12 months.”

JUMBO said it expected “meaningful contributions” from the three new outlets and normalized earnings from the Riverwalk outlet as the renovations are now complete.

The restaurateur added it plans a second Tsui Wah Hong Kong-styled “Cha Chaan Teng” outlet in Singapore, a second JUMBO Seafood outlet in South Korea and two Ng Ah Sio Bak Kut Teh outlets in China and in Taiwan over the next 12 months.