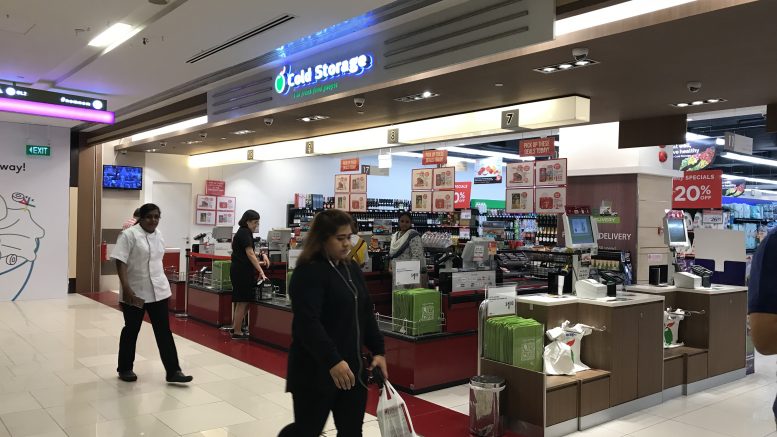 Outlet of Cold Storage supermarket, which is owned by Dairy Farm, at Kinex mall in Singapore

Dairy Farm International reported Thursday its first half net profit was nearly flat on-year at US$178.0 million, compared with US$177.6 million in the year-ago period amid an ongoing restructuring program.

Sales for the six months ended 30 June were down 3 percent on-year at S$5.76 billion, the supermarket operator said in a filing to SGX.

That was due to the deconsolidation of the Rustan Supercenters business in the fourth quarter of 2018 and the food business’ ongoing restructuring plan, Dairy Farm said.

The combined total sales, including all associates and joint ventures, was up 13 percent on-year at US$13.78 billion, mainly on the impact of the strategic investment in Robinsons Retail and a strong performance by Yonghui, the filing added.

“While investment associated with the business transformation impacted overall profit growth, these costs are essential to ensure that we can strengthen the group in areas such as people capability, IT infrastructure and digital development, in order to support future business improvement,” Dairy Farm said. “The earnings impact of these important investments is expected to reduce over time.”

The supermarket and hypermarket division’s operating profit remained in line with the year-ago period as underlying sales performance is showing signs of strength, notably in Southeast Asia, the filing said. In North Asia, sales in Hong Kong continued to grow, particularly in upscale stores, although the Taiwan operations were facing an increasing competitive threat from local rivals’ aggressive expansions, Dairy Farm said.

The convenience store operations had higher sales in all markets, particularly from mainland China, but overall profits were slightly lower on-year as investment in store-space growth in the period offset higher profits in Hong Kong and Macau, Dairy Farm said.

The health and beauty division reported strong sales in North Asia on the strength of the Mannings brand, while Guardian in Southeast Asia showed “encouraging improvement” in both sales and profit performance in the period, the filing said.

IKEA posted higher sales growth in all markets, but profitability was lower on increased cost of goods and pre-opening expenses for new stores under development in Taiwan and Indonesia, Dairy Farm said.

In the health and beauty segment, Dairy Farm operates Mannings in Greater China, Rose Pharmacy in the Philippines and Guardian in Brunei, Cambodia, Indonesia, Malaysia, Singapore and Vietnam.