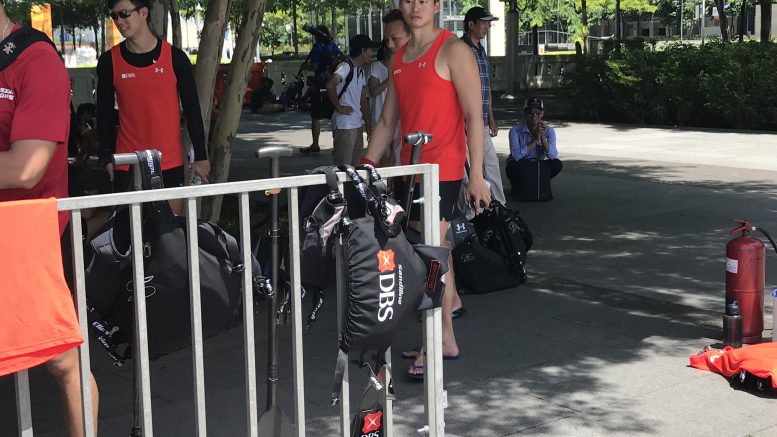 DBS reaped the benefits of higher interest rates in its better-than-expected second quarter earnings, but the bank could face headwinds ahead, with the U.S. Federal Reserve likely to begin retracing some of its hikes.

Piyush Gupta, CEO of DBS, was relatively sanguine, however, on the potential earnings impact of possible lower interest rates, saying the bank is sticking with its guidance for mid-single-digit net interest margin (NIM) growth for the full year.

At a post-earnings press briefing Monday, he estimated that if the Fed cuts its benchmark interest rate by 25 basis points — as is widely expected — that would knock a “basis point or so” off DBS’ NIM in the third quarter.

Economists surveyed by Bloomberg have forecast the first cut as early as this week with a second cut coming later this year.

For the second quarter, DBS reported Monday its closely watched NIM, or the difference between the interest rate banks charge to lend and their cost of funds, rose to 1.91 percent, up from 1.85 percent in the year-ago period, beating analyst expectations for 1.89 percent or 1.90 percent. That was as loans in Singapore and Hong Kong were repriced with higher interest rates, DBS said.

If the Fed cuts rates a second time later this year, that would likely knock another 1-2 basis points off the fourth quarter’s NIM, Gupta said. But he noted, the SIBOR and Hibor rates the bank uses to set lending rates may offer some uncertainty as they may not fully price in, or may overprice, the U.S. interest rate changes.

The impact of lower interest rates could be felt across all of Singapore’s banks. In a recent research note, Daiwa estimated net interest income makes up around 61 percent to 69 percent of total income for DBS, OCBC and UOB.

However, the impact on earnings may not be seen immediately, Gupta noted.

“Some of the impact of the rate increases in the past is still flowing through our book,” Gupta said. “You can see that in the pick up in NIMs in the second quarter to 1.91 [percent]. So some of that impact will still be there. And then when rates start coming down, as when rates rise, we have a lagged effect on our portfolio.”

Indeed, when it comes to fixed-rate mortgages — which in Singapore typically fix rates for two years to a maximum of five years — Gupta said much of DBS’ mortgage book had already been repriced higher as rates increased, with less than 20 percent left to be repriced through the rest of this year. Floating-rate mortgages would have repriced already.

Increased housing market activity can also help to support net interest income, even as mortgage rates might be pressured.

In the second quarter, developers sold 2,350 new private-sector homes, up 27.9 percent on-quarter, according to recent data from the Urban Redevelopment Authority (URA). But that was down 5.1 percent from the second quarter of 2018,  which was prior to the government introducing a fresh round of property cooling measures in July 2018, a move that sharply curtailed home sales.

In the secondary, or resale, and sub-sale market, 2,416 units changed hands in the second quarter, up 26.8 percent on-quarter, but down 49.9 percent on-year, the URA data showed. A sub-sale is a transaction between a buyer of a condo unit and a new buyer before the development is completed.

DBS expects a burst of new mortgages amid the housing market green shoots.

Gupta said second-quarter mortgage bookings were up 60 percent after bottoming in the first quarter; those mortgages will show up in third and fourth quarter earnings, he said.

He noted, however, that the mortgage bookings were much slower than usual, saying that in a good year, the mortgage book would grow by around S$4 billion. In the second quarter, it was up by S$2.5 billion after a weak first quarter, and will likely come in with growth of around “a billion and change” in the second half, Gupta said, estimating growth around S$2 billion for the year.

DBS could also see earnings support from other measures. In anticipation of interest rate cuts, Gupta said the maturity of securities on its balance sheet had been extended to four to five years — a move that will lock in higher interest rates for longer. In addition, Gupta said the bank had been “conservative” on allowances and provisions and he seemed to indicate some of those could be reversed in later earnings periods.

Much of Gupta’s sanguinity is on the bank’s expectations that the Fed only has two rate cuts in store as U.S. domestic economic data, particularly retail sales and consumption, have remained relatively well-supported.

“A lot of people think this presages a series of cuts next year. I’m not convinced,” Gupta said. “I think if the data is weak, you’ll see more cuts, but if the data doesn’t fall very markedly, you might see them do a couple of insurance cuts and wait and watch.”