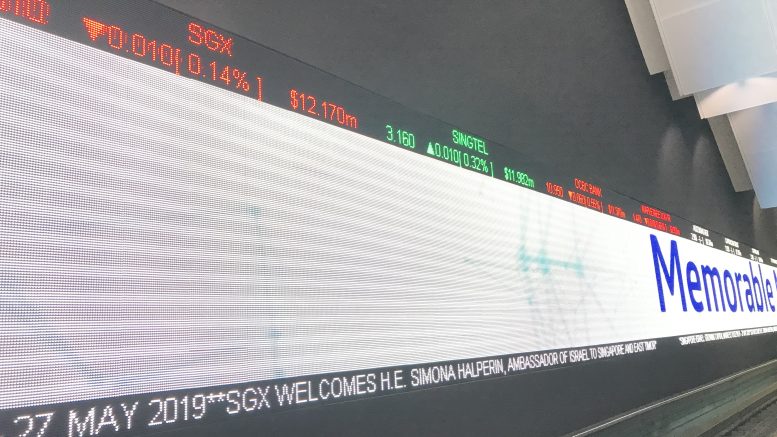 This article was originally published on Saturday, 13 July 2019 at 22:54 SGT; it has since been updated to include Yoma Strategic and Spackman Entertainment.

These are Singapore companies which may be in focus on Monday, 15 July 2019:

The China Securities Regulatory Commission (CSRC) has accepted the application from Wilmar’s 99.99 percent-owned subsidiary Yihai Kerry Arawana Holdings (YKA) for a proposed listing on the Shenzhen Stock Exchange, the commodity trader said in a filing to SGX Friday.

Fidelity Funds ceased to be a substantial shareholder of Cordlife Group, disposing of its entire 6.39 percent direct stake in an off-market transaction Wednesday, the fund manager said in a filing to SGX Friday.

Pernod Ricard has completed a deal to take a 34 percent stake in Seagram MM Holdings, a joint venture between Yoma Strategic, the Win brothers and Delta Capital Myanmar which will distribute whisky in Myanmar, Yoma said in a filing to SGX late Sunday.

Maxi-Cash Financial Services said Friday that S$14 million of its existing S$70 million 5.50 percent notes due 2020 were validly tendered to its offer to acquire S$5 million of the notes by deadline expiration on Friday morning.

The company may decided to increase the maximum acceptance amount, with an announcement expected on or around Tuesday, Maxi-Cash said.

For the offer to exchange any of the notes for a 6.35 percent notes due 2022, S$26.5 million in notes were tendered and accepted for exchange, Maxi-Cash said, adding the settlement date is expected to be on or around 24 July.

Spackman Entertainment Group entered a deal to acquire Simplex Films from four parties for around S$3.3 million in shares, the South Korean drama producer said in a filing to SGX Monday.

The contract covers the deconstruction and construction work of the dryers, heat exchangers and absorption tower, AusGroup said.

DBS: Where to boldly go for income in a zero- and negative-yield world