Genting Singapore said on Wednesday it has committed to investing around S$4.5 billion to revamp and expand its Resorts World at Sentosa integrated resort on Singapore’s Sentosa Island, including growing the Universal Studios Singapore park.

Separately, Las Vegas Sands said it entered a deal with Singapore to expand the city-state’s other integrated casino resort, Marina Bay Sands, by adding a 15,000-seat arena, a 1,000-room luxury hotel tower — the project’s fourth hotel tower — and additional Meetings, Incentives, Conferences and Exhibitions (MICE) space. LVS said the projected budget for the expansion was around US$3.3 billion, or S$4.5 billion.

Genting Singapore said the expansion would set the stage for future growth and should be seen as a vote of confidence in the Singapore market.

“When completed, the expanded IR is anticipated to continue to provide a distinctive purpose-of-visit tourism experience and further broaden the IR’s appeal to a wider spectrum of premium customers and millennials,” Genting Singapore said in a filing to SGX on Wednesday.

“It will integrate with the future Greater Southern Waterfront and is expected to become the centerpiece of the new entertainment hub of Asia. The group is well positioned to stay ahead of the intensifying international and regional competition,” it added.

The Greater Southern Waterfront project is expected to begin in the next five to 10 years as part of a plan to rejuvenate Singapore’s central business district (CBD), which is dominated by older office buildings, by encouraging more mixed-use developments, such as hotels and residential offerings. 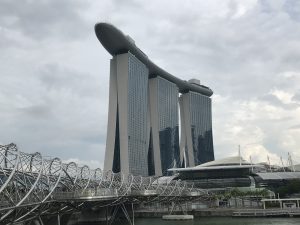 Genting Singapore said it would fund the integrated resort’s expansion via internal resources, including operating cash flows, and/or bank borrowings.

Resorts World at Sentosa, which is an indirect, wholly owned subsidiary of Genting Singapore, will take around five years to expand the integrated resort, the company said.

The existing integrated resort will have around 50 percent of new gross floor area, adding around 164,000 square meters of leisure and entertainment space, the filing said.

Genting Singapore will expand the in-resort accomodation, adding up to 1,100 more hotel rooms at a new waterfront complex within Resorts World Sentosa, the filing said.

The new developments will include adding two new sections to Universal Studios Singapore, Minion Park and Super Nintendo World, as well as expanding the S.E.A. Aquarium and rebranding it as Singapore Oceanarium, it said.

The MICE facilities will be expanded to bring more events into the city-state, the company said.

The waterfront promenade area will be enhanced and will be lined with restaurants and retail assets and something identified only as “a spectacular public attraction,” Genting Singapore said.

In addition, the integrated resort will develop a driverless transport system for “last-mile connectivity” to bring more foot traffic to Resorts World Sentosa and the rest of Sentosa Island, the filing said.

The commitment was in an agreement with Sentosa Development Corp. (SDC) to update its original deal from 2007, the filing said.