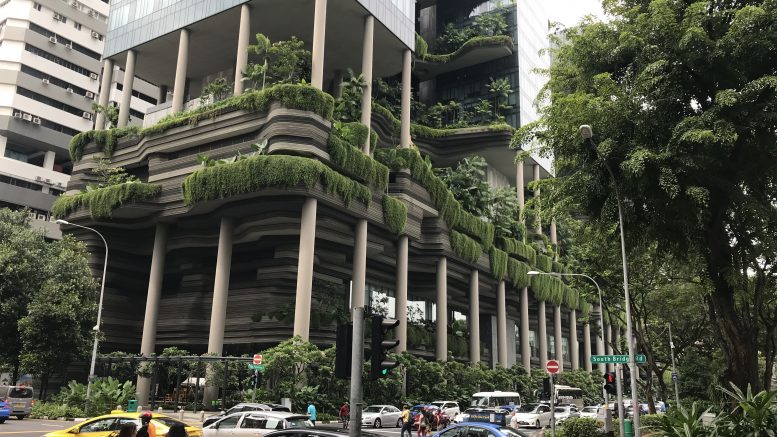 The green ParkRoyal Hotel on Pickering in Singapore, part of the Pan Pacific Hotels Group

Hotel operation is the antithesis of most environmental efforts: It uses too much energy and too much water and creates too much waste.

But at the Top Hotel World Tour conference in Singapore recently, some of the largest hoteliers in Asia said they’re hoping to change that, though they caution going green needs to begin at the beginning.

“Most people come in at the pre-opening [post-design] phases. That’s too late,” Alexandra Yao, vice president of development at Mandarin Oriental Hotel Group, said at the conference.

“At that point, you can have reduced plastic use, you can change the light bulbs, but the big construction of the hotel where there’s a huge opportunity to build in a green way or to use solar panels instead of diesel fuel, it’s too late,” she said. “No one is going to retrofit those things into a hotel.”

Yao said that in Asia Pacific, hotel owners are now often the second generation of tycoon families, and they are “attuned” to sustainability concerns.

“We’re all looking to Six Senses to set the tone. They’ve done the hard work. They’ve been able to prove that we can be sustainable, and make money and have great guest satisfaction and great owners,” she said. “I feel strongly its something that all the other big hotel companies need to follow.”

Six Senses has been rewarded by the market for its efforts: Earlier this year, Intercontinental Hotels acquired Sixth Senses from private equity fund Pegasus Capital Advisers for US$300 million (currently around S$406 million) in a deal that includes the management of 16 hotels and resorts and 37 spas, but not real estate.

Jeffery Smith, vice president of sustainability at Six Senses, agreed that it’s important to embed sustainability from the beginning, but added that hotel developers also need to use other tools, particularly the environmental impact assessment.

“I think too often [environmental impact assessments are] viewed by the development team and the construction and the project team as a hurdle, a regulatory hurdle,” Smith said at the conference. But he added, “They’re full of great content for us as an operator that we can use.”

As an example, he cited a hotel Six Senses is building in Fiji, which identified critically endangered iguanas living on the site, and enabled the hotel to improve the guest experience.

“We actually saved some habitat for these critically endangered iguanas on site,” he said. “We can bring guests on spotlight tours to come into the jungle … They’re rare. They’re hard to find. and if we had not read the impact assessment, or worse, never done one, we would have bulldozed that.”

Others pointed to specific technology that can help to ease the waste problem.

Philip Marshall, managing director at Wellington Management Services, pointed to using waste-to-energy systems to as helping to ease operating expenditures, as hotels deal with waste in a more sustainable way.

“Every time you get rid of waste, it costs you money,” Marshall said at the conference. “[Waste-to-energy systems] may be a high [capital expenditure], but over time, they’re going to save a lot of money.”

Some hotels are also getting their guests involved in the process.

Katie Yang, project director at hospitality interior design consultants HBA, said that at her project with the Paramount Hotel Haiyan the decision was made to include screens in the rooms telling guests how much energy they were using.

That was to counter a tendency for guests to leave air conditioning running even when not using the room, she said. To help reinforce the message, guests who keep their utility use below average are awarded vouchers for the hotel’s restaurants.