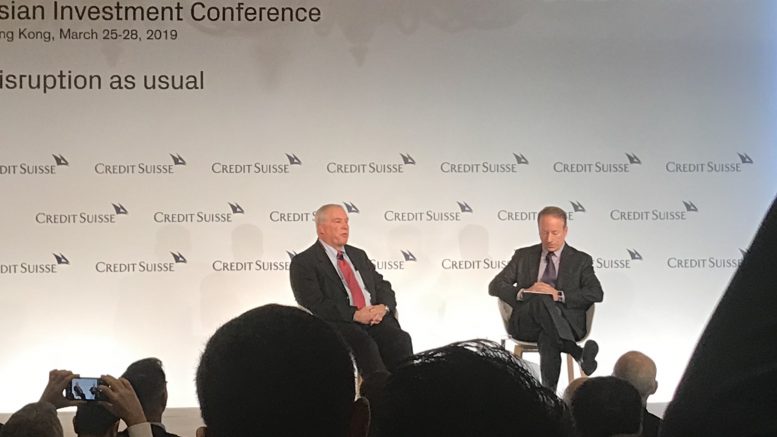 Eric Rosengren, president and CEO of the U.S. Federal Reserve Bank of Boston, (left) at the 2019 Credit Suisse Asian Investment Conference in Hong Kong on 26 March.

HONG KONG—The yield curve inversion in the U.S. may have set off a fresh round of market jitters, but Eric Rosengren, president of the U.S. Federal Reserve Bank of Boston, said on Tuesday that it’s no longer a reliable recession signal.

A yield curve is considered inverted when short-term interest rates are higher than long-term ones. Lending long term is usually considered riskier due to the need to wait longer for loans to be repaid. The inversion is widely considered a recession signal, although sometimes the recession takes a couple years to arrive.

On Friday, the U.S. yield curve inverted for the 10-year yield for the first time since 2007, which was around the time the Global Financial Crisis began, after U.S. manufacturing data missed estimates. That worried markets, with the Dow Jones Industral Average and the S&P 500 falling nearly 2 percent each on Friday, although they finished nearly flat on Monday.

In Singapore, the jitters sent the Straits Times Index down almost 1 percent on Monday, although it’s recovered a bit in Tuesday’s early trade.

However, Rosengren told the Credit Suisse Asian Investment Conference on Tuesday the inversion isn’t the signal it once was, and pointed instead to overseas market moves affecting U.S. yields.

“We’ve seen slowing in growth in Europe and China. We’ve seen that the long yield in many countries has gone very close to zero,” he noted, pointing to the 10-year German bund yield trading around zero. “We’re seeing a situation where globally there is less confidence that we’re not going to potentially [see] a slower economy in Europe and potentially a slower economy in Asia.”

While he said he saw less risk in the U.S. economy, lower yields in Europe and Asia were pushing down Treasury yields too.

The reason the inversion is different this time is a matter of distinguishing “causation and correlation,” Rosengren said.

“One of the reasons in the past that you’ve seen a negative slope in the yield curve indicating a possible recession is that frequently it has been that the Fed is fighting inflation and trying to bring inflation down,” he said. “The way we do that is to raise short term interest rates, slow down the economy and we see the long part of the yield curve go down.”

But now, the Fed has the opposite battle: It’s working to bring inflation up to its 2 percent target, Rosengren said.

“We’re not fighting inflation the way that caused many of those correlations,” he said.

“It’s a very different economic environment than we’ve seen in previous cycles. So I don’t take nearly as much information from the shape of the yield curve as some people do.”

However, he noted that he isn’t ignoring the inversion, and was concerned that the 10-year Treasury note yield was as low as it is.

“But I think that if the economy does what I expect it to do, that that’s going to be temporary,” he said.

Rosengren said he expected U.S. economic growth around 2.0 percent to 2.5 percent this year and that inflation will start to hit its target.

Deutsche Bank: Watch out for this risk in Japanese stocks

Singapore market trends Friday: Jitters as Japan may be next Trump trade target