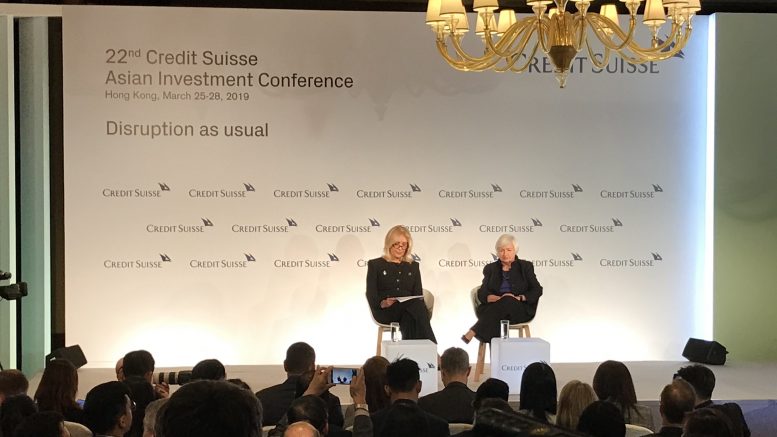 The disruptions and uncertainty central bankers have been dealing with over the past few years have one root cause, said former U.S. Federal Reserve chief Janet Yellen on Monday.

She pointed to “things like Brexit, U.S. trade policy, developments in Italy that create at least some risk of a rekindling of the European banking crisis and [uncertainty] around the euro,” adding, “I think we have to expect there will be future disruptions like that.”

Those disruptions have something in common, Yellen said at the Credit Suisse Asian Investment Conference in Hong Kong on Monday: “They’re all manifestations of populism, of developments in countries that are driven by unhappiness of large groups in the population who feel capitalism isn’t working for them.”

Yellen added that’s driving those groups in protectionist or immigration concerns, as well as creating “tremendous uncertainty” for businesses and monetary policy.

Technological disruptions are also a factor, she said.

“Some of those same technological developments that are exciting…I think they’re also drivers of populism,” Yellen said. “The combination of globalization and technological change is particularly rewarding skills. This essentially has eliminated jobs that were middle income, solid wage jobs in the U.S. and other developed countries has really resulted in widening income inequality.”

She added that upcoming technology, such as artificial learning and artificial intelligence, were set to intensify pressure in the labor market.