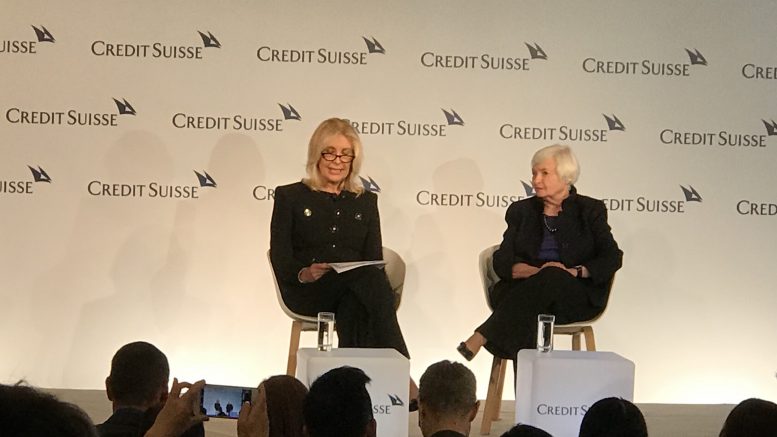 “We generally look to be in a low short rate environment for unfortunately as far as the eye can see,” Yellen, who headed up the U.S. central bank from 2014 to 2018, told the audience at the Credit Suisse Asian Investment Conference in Hong Kong on Monday.

“If its true that we’re in that type of environment for quite a long time to come, we do have to worry that central banks are not going to easily have the tools to adequately respond,” she said.

“The euro area and Japan have inflation that’s still well below their 2 percent targets and no room at all to cut short rates and large balance sheets because they’ve done a lot of asset purchases,” Yellen noted. “How to respond on the part of these central banks really is a critical concern.”

Yellen added that the U.S. was a bit ahead of the game, partly by having achieved an inflation target of around 2 percent, while U.S. short-term rates are a little under 2.5 percent, which while low, were “significantly” up from zero.

“If there’s a downturn, there is a little bit of room to cut short term rates,” she said. “Conceivably, the tools we used during the crisis, such as further asset purchases, the Fed does have the capacity to engage in.”

In addition, using forward guidance has helped to drive down longer-term interest rates, she said.

Yellen noted that historically, in a recession, the Fed would cut short-term rates by as much as 5 percentage points. “That capacity doesn’t exist now,” she said.

Another concern: Short-term rates have generally come down across developed markets, she noted.

“It’s not only because of the financial crisis. It looks like it predated it,” Yellen said, adding that there may be common causes, such as low productivity growth, aging populations and slow labor force growth, which have been weakening investment spending and the demand for funds.

She said that in any future global crisis, the Fed may be able to step up with swap lines with other countries, a politically sensitive tool it made use of during the Global Financial Crisis, which began in 2007 to 2008.

“Congress has not given the Fed a mandate to be a lender of last resort to the world’s financial system,” Yellen noted. But added, at the time, the Fed made the case that it was in the interests of the U.S.

A meltdown in dollar-based banking globally “would have had a dreadful impact on the U.S. economy; and foreign-based banks that operate globally, including in the U.S., that are making significant loans to U.S. businesses and households,” Yellen said. “My guess is the Fed, in a future crisis, would be able to take those actions, although its uncertain. It would depend on the political environment.”

However, it’s not all on the central banks, or even just the Fed to respond to an economic crisis, Yellen added, saying it would be “wise” to also turn on the fiscal taps.

If interest rates are set to remain low, debt-to-GDP (gross domestic product) levels can rise, and the interest-rate payment burden isn’t as high, she said.