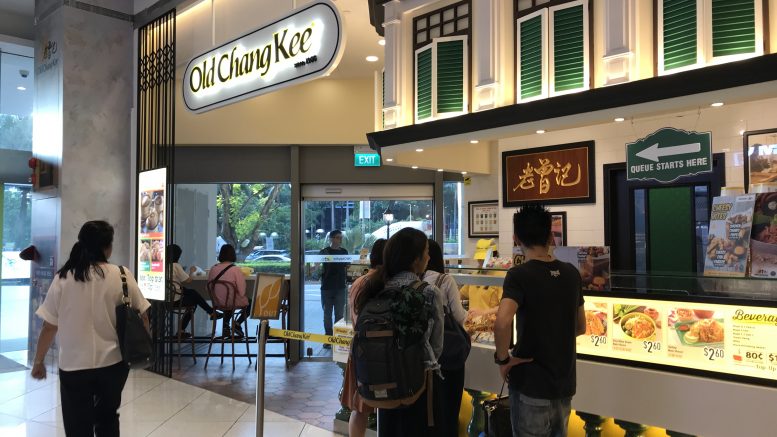 “The group is pleased that its efforts to improve its productivity are bearing fruit. These initiatives include further expanding its product range including seasonal product launches, improving cost management of key ingredients, and increasing the production efficiency of its factories,” Old Chang Kee said in the statement.

The gross profit margin increased to 64.1 percent in the third quarter, up from 60.4 percent in the year-ago period, mainly on improved worker efficiency and food-cost management, it said.

Revenue for the quarter ended 31 December increased 3.8 percent on-year to S$23.08 million, it said in a filing to SGX after the market close on Thursday.

Revenue from other services, such as export sales, events, delivery and catering services, rose by around S$237,000, or 66.2 percent, to S$595,000, mainly on export sales of around S$102,000 to its joint venture in the U.K., and on higher events and delivery sales, the curry puff seller said.

The outlet in London’s Covent Garden has generated positive reviews, but high worker costs remain a challenge, it said.

“The group will continue to fine-tune its product offerings to adapt to the UK market, and to manage its manpower and food costs more effectively, as it becomes more familiar with the U.K. retail market,” it said.

For the Singapore operations, Old Chang Kee said it expected rental, labor and raw material costs would remain high for the next 12 months, with the labor market set to remain tight.

As of end-December, Old Chang Kee said it operated 88 outlets in Singapore, down from 92 outlets at end-December 2017.