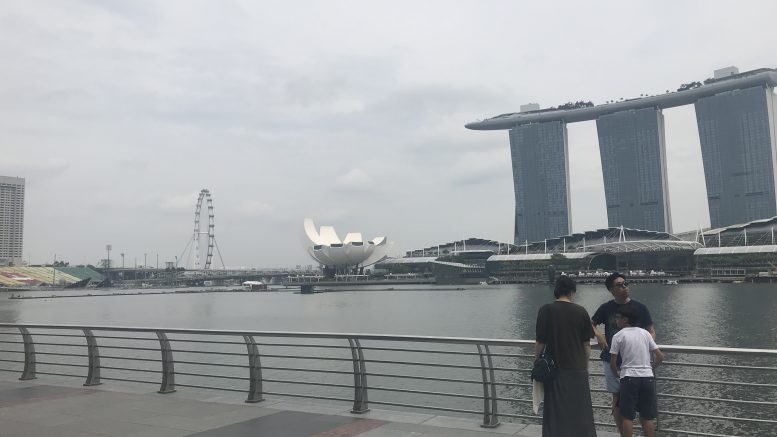 Singapore’s central business district at the Bayfront, across from the Marina Bay Sands hotel, the ArtScience Museum and the Singapore Flyer observation wheel. Taken December 2018.

Asian markets may extend recent losses on Friday after Wall Street tumbled Thursday amid a mix of Apple’s slashed revenue guidance and fears over signs U.S. economic growth is slowing.

Apple shares tumbled around 10 percent on Thursday after CEO Tim Cook said in a letter to investors that an economic deceleration in Greater China the effects of rising trade tensions with the U.S. had resulted in the iPhone maker slashing its guidance for the quarter ended 29 December to US$84 billion. That was off Refinitiv forecasts for US$91.5 billion, and off Apple’s original estimate for US$89 billion to US$93 billion.

Analysts were taking this as a canary in the coal mine.

“This serves as a useful reminder that even any possible U.S.-China trade deal that may eventually calm down markets still involves permanent welfare losses to the economy based upon developments to date,” Scotiabank said in a note on Thursday.

Data from the U.S. showed mixed signals on whether market fears of an economic slowdown were playing out.

U.S. manufacturing activity measured by the ISM index of factory activity released Thursday fell 5.2 points to 54.1 in December, its lowest since November 2016 and the biggest drop since October 2008, during the Global Financial Crisis, Reuters reported. It remained above the 50 level, which divides expansion territory from contraction, but commentary pointed to Trump administration tariffs on steel and aluminum imports and Chinese goods as hurting manufacturing, the report said.

Analysts were pessimistic on the data.

“The federal government has shut down and purchasing managers are saying the U.S. economy is likely to shut down later on this year too. Economic growth will be slower in 2019 than it was in 2018, you can take that bet to the bank, purchasing managers are saying,” Chris Rupkey, chief financial economist at MUFG Union Bank, said in a note on Thursday. “Caution levels are rising with supply chain re-sourcing from China disrupting business operations and Brexit uncertainty affecting business plans as well.”

Separately, the ADP National Employment Report on Thursday showed U.S. private payrolls rose by 271,000 in December after rising 157,000 in November, above a Reuters forecast for 178,000, Reuters reported, noting that seasonal factors may skew the data higher. U.S. nonfarm payrolls data due later Friday will be closely watched, with Reuters forecasting a 177,000 increase in December, up from November’s 155,000.

March futures for Japan’s Nikkei 225 index were up 85 points at 19,510 at 7:17 A.M. SGT, according to CME data; that compares with the index’s close at 20,014.77 on 28 December. The Tokyo Stock Exchange was closed on Monday, Tuesday, Wednesday and Thursday for holidays.

Singapore’s Straits Times Index fell 0.86 percent to 3012.88 on Thursday; January futures for the index were at 3007 on Thursday, while February and March futures were at 3009 and 3006 respectively.