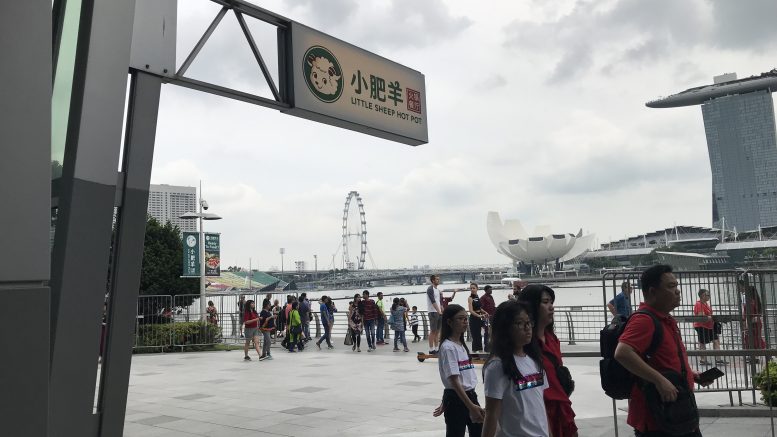 “Because the company just listed last year and because we have all the projects coming all in awhile, it will actually take some time to build up and to stabilize all the entities,” she said on the sidelines of the opening day on Saturday of the company’s first Little Sheep Hotpot restaurant outlet in Singapore.

“We are looking for more professional people and more stable teams to move forward with us,” she added.

That was after No Signboard reported in late November a fiscal full year net loss of S$2.31 million, swinging from a year-ago profit of S$7.72 million, amid the impairment of its beer business.

The loss came as the Danish Breweries beer subsidiary underperformed senior management’s expectations, No Signboard said at the time, adding it had spurred efforts to “rationalise and restructure” the unit. That involved acquiring the remaining 20 percent it didn’t already own to obtain full control and changing leadership and replacing the entire sales team, it said.

In its annual report filed on Sunday, No Signboard said it was pursuing a “new strategic direction” for its beer business and had appointed Arthur Quek to form a new sales team to rebrand and develop the segment.

It also said it was working with a new brewer facility to improve the Draft Denmark beer’s taste and change the design of the bottles.

On Saturday, COO Lim said the relaunched beer products would be on the market very soon, adding that “the whole look is different,” with new packaging. The offerings would include canned beer, as well as bottles, she said.

Lim said the beer division had faced production problems, with some facilities in China, while the packaging and filling had been done in Vietnam.

“We used to have this problem: We have the bottles but no beer, [or] beer, but no bottles,” she said, adding that now all of the production has been consolidated at a new brewery in Vietnam.

Despite the growing profusion of hotpot and steamboat offerings in the city-state, Lim was also optimistic about the opening of the Little Sheep hotpot outlet on Saturday, pointing to the chain’s unique offerings, including the complicated composition of the soup broth and the signature thin-sliced mutton.

Indeed, the first outlet is located in the central business district, at One Fullerton, in a prime tourist and business hub, and it offers an ambiance suitable for business meetings, which other steamboat restaurants may not be able to match.

No Signboard had announced back in June that it had secured franchise rights to develop the Little Sheep restaurant brand in Singapore, with a target of launching one restaurant per year under the brand in the first five years of the ten-year agreement.

Lim was also positive on the outlook for its new Hawker chain, which offers hamburgers in region-centric flavors such as nasi lemak, chicken rice and chili crab. So far, there are only two outlets, but Lim said the response has been “quite good.”

However, she didn’t provide any details about its newly formed subsidiary in Malaysia called Pancakes Restaurants. Lim indicated it will either be franchised or “bought over,” but she said it was still in the negotiation stages. 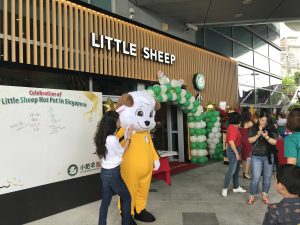 The opening day at the first Little Sheep Hot Pot restaurant in Singapore at One Fullerton. No Signboard has franchised the Little Sheep brand within Singapore. Photo taken December 2018.