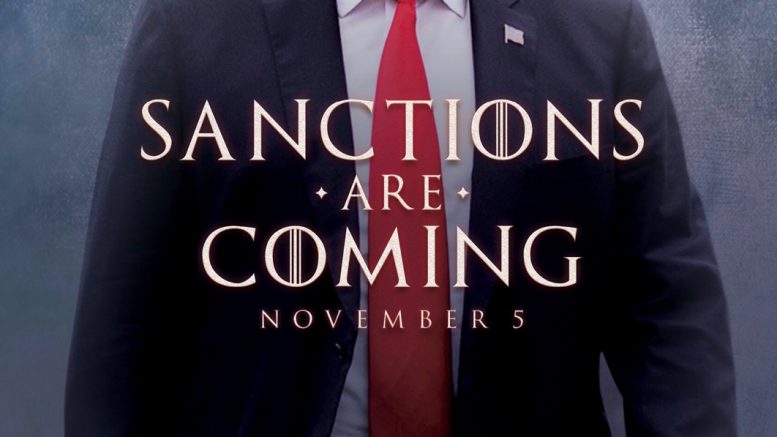 Image from Donald Trump’s tweet about the Iran sanctions.

Crude oil prices may rise in Asia on Monday with the full impact of renewed U.S. economic sanction on Iran scheduled to start at midnight.

ICE Brent crude futures settled at US$72.83 a barrel, down 6 cents on Friday, while NYMEX West Texas Intermediate ended at US$63.14 per barrel, a 0.86 percent dip. Both contracts are down more than 15 percent from the near four-year highs touched in early October.

The sanctions, announced by President Donald Trump, will deny access to the U.S. banking system for countries doing business with Tehran. The U.S. says Iran will have “zero oil revenue to spend … on unlawful ballistic missiles, terrorism, cyberattacks, and other destabilizing activities.”

The U.S. has granted waivers to eight nations to keep buying oil from Iran for up to 180 days. While U.S. Secretary of State Michael R. Pompeo won’t officially identify the eight importers until Monday, a few countries have likely been identified.

Turkey’s energy minister said it has been granted a waiver to keep buying Iranian oil; Iraqi officials have also said Iraq can temporarily keep buying oil from Tehran, but can’t pay for it with U.S dollars, according to Reuters. India and South Korea were also on the list, an anonymous source told Reuters.

The sanctions are “aimed at fundamentally altering the behavior of the Islamic Republic of Iran,” said Pompeo during a joint conference call with Treasury Secretary Steven T. Mnuchin and reporters. “This part of the campaign about which we’re speaking today is simple. It is aimed at depriving the regime of the revenues that it uses to spread death and destruction around the world. Our ultimate aim is to compel Iran to permanently abandon its well-documented outlaw activities and behave as a normal country.”

Separately, the number of rigs drilling for oil in the U.S. fell by 1 to 874 last week, the first dip in four weeks, Baker Hughes said on Friday.

Meanwhile, bullish bets on crude oil futures and options in London and New York eased 2,142 contracts to 214,590 during the week to Oct. 30, the Commodity Futures Trading Commission said on Friday, marking the lowest level since Sept. 12, 2017.