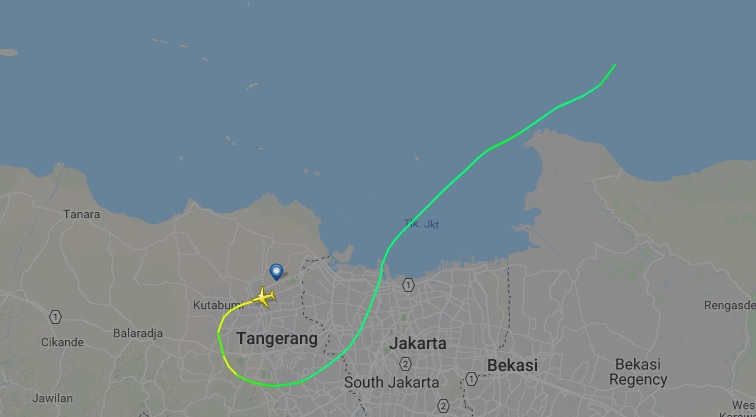 A Lion Air flight from Jakarta to Pangkalpinang, flight JT 610, has reportedly crashed into the sea shortly after takeoff.

Report from the Indonesian rescue agency’s press conference indicated that there were 188 or 189 passengers and crew on board, including two pilots, six cabin crew and two infants.

Photos and videos circulating on Twitter, some reportedly from state energy company Pertamina, indicate the crash location and debris have been found.

The Straits Times reported, citing Indonesia’s Ministry of Transportation, that the plane had requested a return to base before disappearing from radar.

Lion Air was reportedly operating a Boeing 737 Max 8 aircraft. Flightradar24 said the aircraft was delivered to Lion Air in August.

Boeing said via Twitter it was aware of the accident and was monitoring the situation.

Boeing is aware of reports of an airplane accident and is closely monitoring the situation.

The preliminary data from the aircraft indicated an increase in speed and decrease in altitude at last transmission, Flightradar24 said on Twitter.

In June, Lion Air announced that it had its safety ranking upgraded to its highest level by global rating agency AirlineRatings.com after Indonesia passed an international audit. That was after an audit of Indonesia’s compliance with eight categories in the International Civil Aviation Organization Universal Safety Oversight Audit Programme (USOAP), according to the Lion Air statement in June.

We are downloading and processing granular ADS-B data that was transmitted by the aircraft, but preliminary data show an increase in speed and decrease in altitude at last transmission. #JT610

This is a developing news story; please check back for updates.