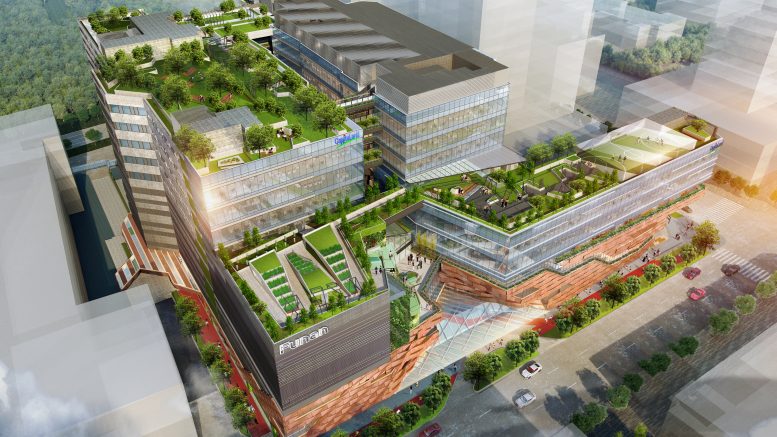 An artist's impression of how Funan Mall will look once completed; used with permission from CapitaLand.

CapitaLand Mall Trust and CapitaLand said on Friday that Funan, its redevelopment project on the site of the former Funan DigitaLife Mall, is set to open ahead of schedule in the second quarter of 2019, instead of in the third quarter of next year, amid an earlier-than-expected structural completion.

It noted that 72 percent of the overall construction has been completed.

The opening of lyf Funan Singapore, a co-living serviced-residence component within the Funan project which will be managed by Ascott Ltd., will also open earlier than expected, in the fourth quarter of 2019, instead of in 2020, it said in a filing to SGX on Friday.

The underpass to connect Funan and City Hall MRT station is expected to be completed in 2021, it said.

CapitaLand Mall Trust Management’s CEO Tony Tan said in the statement that leasing for Funan’s retail and office components was at 70 percent and 60 percent respectively.

Funan is aimed at becoming an online-and-offline shopping mall to bolster retailers’ “ominchannel” strategies, which combine bricks-and-mortar and online sales, as well as creating a customer “experience” zone, the statement said.

“All players must find a way for the physical and digital realms to coexist. While the current market share of online sales is small, its pace of growth will only speed up,” Lee Chee Koon, president and group CEO of CapitaLand, said in the statement. “Brick-and-mortar businesses must thus go beyond passively selling products and services, to generating quality retail experiences and emotional connections.”

Among the “experiences” to be offered at Funan will be a cycling lane on level one, as English folding-bike brand Brompton Bicycle will be locating its first Singapore store at the mall and customers will be able to test-drive the offerings, it said.

Funan will also have a futsal court, operated by Ark Futsal, Edible Garden City operating a rooftop urban farm with workshops and cooking classes at ABC Cooking Studio, it said.

As e-commerce has pulled consumer interest away from mall shopping generally, many malls have been shifting their focus away from retail shops and toward “experiential” offerings, such as dining and gyms.

Some of the digital features at Funan will include using facial recognition to give shoppers customized recommendations, video analytics to study shopper traffic and crowd density and an app for Ascott’s lyf space to allow social networking, room booking and to act as a mobile key, the statement said. Facial recognition may also be used at the office tower turnstiles, it said.

It will also use automated guided vehicles aimed at “hands-free” shopping as well as a robotic arm for a 24-hour drive-through click-and-collect services, it said.