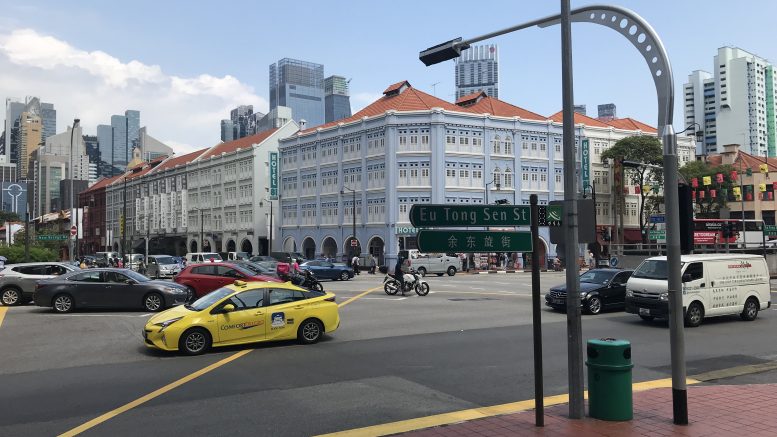 These are the Singapore stocks which may be in focus on Tuesday 25 September 2018:

In a move that will likely affect ComfortDelGro’s taxi operations, Singapore’s competition regulator on Monday issued an infringement decision against ride-hailing firms Grab and Uber, saying the sale of Uber’s Southeast Asian business to Grab led to a substantial lessening of competition.

Singapore’s regulators imposed remedies to less the deal’s impact on riders and drivers and also imposed financial penalties on Uber and Grab to deter any future completed, irreversible mergers that could harm competition, it said.

Star Attraction’s and related companies’ holding in or valid acceptances of the offer for Wheelock Properties (Singapore) has risen to 964.13 million shares, or 80.58 percent of the issued shares as of the close of business on Monday, DBS Bank said on behalf of the companies on Monday.

That was up from 911.93 million shares, or 76.21 percent of the issued shares, held on or before the announcement of Star Attraction’s offer, it said in a filing to SGX after the market close on Monday.

The offer for the shares values the Singapore unit at over S$2.5 billion and the offer price of S$2.10 in cash marks a 20.7 percent premium over the last transacted price prior to the announcement, according to previous filings. However, analysts at OCBC and UOB KayHian have advised against accepting the offer, saying it undervalues the company. In a previous filing, DBS Bank said that Star Attraction didn’t intend to revise the offer price.

Noble said on Monday that it was “supportive” of Sundance Resources’ restructuring and its placement of shares with Aust-Sino Resources, a deal which would see the Singapore commodity trader’s holdings of convertible notes cancelled in exchange for cash, shares and options.

The restructuring deal includes the placement of iron ore miner Sundance shares, in two tranches, with Aust-Sino Resources, for a total value of around A$58 million, it said in a filing to SGX before the market open on Monday.

Vividthree shares were set to begin trading on Catalist at the market open on Tuesday after its placement of 51.8 million shares at S$0.25 each was fully subscribed, raising S$12.95 million.

The digital effects company’s market capitalization based on the placement price and post-placement share capital of 334.01 million shares is estimated at S$83.50 million, according to the prospectus.

Yoma Strategic said on Monday that its wholly owned subsidiary, Yoma Fleet, entered an agreement for an exclusive partnership with Myan Shwe Pyi Tractors, or MSP CAT, which is the authorized dealer for Caterpillar-branded heavy equipment in Myanmar.

Yoma Fleet, which has an automotive and heavy equipment financing platform, will help support MSP CAT’s retail and rental business as well as provide funding for its customers, the filing to SGX around midday Monday said.

Tiong Seng Holdings said on Monday it signed a memorandum of understanding with Laing O’Rourke to develop and use the U.K.-based company’s proprietary FreeFAB 3D printing technology for the construction industry.

“The group will explore 3D printing for construction that allows complex building components and prototypes to be designed and fabricated in a cost-effective manner with shorter lead times. FreeFAB has also enabled the creation of unique designs and shapes of structure formerly unattainable through conventional methods,” Tiong Seng said in a filing to SGX on Monday after the market close.

It noted that the technology’s adoption of re-usable wax as the medium for printing also “dramatically” lowers the carbon footprint from production.

“Ms. Lai’s vast experience in [the] real estate sector, encompassing global marketing and leasing, asset and property management would add value to Suntec REIT,” it said in a filing to SGX.

CapitaLand said on Monday that it increased its shareholding in wholly owned subsidiary Balsamine (Brisbane), or BBPL, an investment holding company incorporated in Australia.

BBPL alloted an additional 9.15 million shares at A$1 each to its sole shareholder, Balsamine (S), another wholly owned CapitaLand subsidiary, for a total cash consideration of A$9.15 million, or around S$9.09 million, it said in a filing to SGX on Monday.

The proceeds of the increase will be used to fund BBPL’s general working capital requirements, it said. CapitaLand’s interest in BBPL increased to 10.5 million shares, it said.

Fincantieri SpA has acquired or agreed to acquire or valid exit-offer acceptances of 1.119 billion shares of Vard Holdings, or 94.82 percent of the outstanding shares as of the close of 21 September, Citigroup Global Markets Singapore said on behalf of Fincantieri on Monday.

Q&M Dental said on Monday, in response to queries from SGX-ST that the proposed delisting of its associated company Aidite from the New Third Board, announced earlier this month, was not a restructuring exercise and was instead a desire to explore “certain strategic business development opportunities.”

SGX-ST had queried the proposed delisting  so soon after its listing on the New Third Board in 2016 and had asked what restructuring was under consideration, it noted.

Q&M Dental said that Aidite didn’t disclose the details of the business opportunities in its announcement earlier this month.

“The board is not in a position to disclose information not disclosed by Aidite in its own announcement,” Q&M said in the filing to SGX before the market open on Tuesday, noting that Aidite has separate management.

It also noted that the 4.66 million new Aidite shares which were slated to be issued to the management in China have not yet been issued and that the profit guarantee wouldn’t be reinstated after the proposed delisting.

EMAS Offshore said on Monday that it has appealed a decision by the Financial Supervisory Authority of Norway to delist its shares from the Oslo Stock Exchange and that the matter has been referred to the Norwegian Ministry of Finance.

The FSA had on 15 August resolved to require the Oslo Stock Exchange to delist the shares, with the stock exchange saying the last trading date had been set for 28 September, the filing to SGX on Monday said.

Since the April 2018 start of the buyback mandate, Japfa has bought back 429,300 shares, or 0.024 percent of the issued shares excluding treasury shares at the time the mandate began, it said in a filing to SGX after the market close on Monday.

Correction: This article has been changed to reflect the correct consideration paid in Japfa’s share buyback. The correct amount is S$187,059.

This article was originally published on Tuesday 25 September 2018 at 7:20 A.M. SGT; it has since been updated to include items on Noble and Q&M Dental.