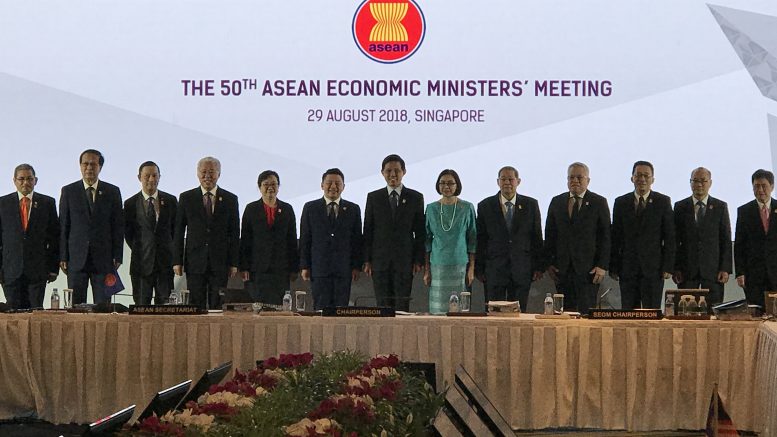 That was despite news this week that the U.S. and Mexico appeared to have reached a deal on updating the NAFTA, or North American Free Trade Agreement, a development that assuaged some market fears about the Trump administration’s belligerent tone on global trade.

Singapore’s Minister for Trade and Industry, Chan Chun Sing, used his opening remarks at the meeting, which is being held in Singapore this week, to highlight these concerns, although he didn’t name any specific countries. Singapore currently holds the chairmanship of the 10-member Association of Southeast Asian Nations, or ASEAN.

“The past two years have posed challenges for ASEAN, and the multilateral trading system as a whole,” he said, according to his prepared remarks. U.S. President Trump won the presidential election nearly two years ago.

“We have witnessed an escalation of trade tensions between major economies and the increasing inclination for some countries to adopt inward-looking policies. It is clear that trade openness can no longer be taken for granted and it has never been more important for ASEAN to stand united in support of an open, rules-based multilateral trading system,” he added, according to the prepared remarks.

Singapore Prime Minister Lee Hsien Loong echoed the sentiment in his remarks at the opening ceremony.

“Trade tensions between the U.S. and our other dialogue partners, including China, the EU and Canada, have escalated,” Lee said, according to his prepared remarks. “The rules-based multi-lateral trading system, which has underpinned ASEAN’s growth and prosperity, is under pressure.”

But Chan’s later remarks appeared focused on how ASEAN might continue to develop trade within the region amid the headwinds from U.S. policy changes.

He noted, in his opening remarks of the ASEAN Free Trade Area (AFTA) council meeting, that under the ASEAN Trade in Goods Agreement (ATIGA) and the ASEAN Economic Community (AEC) Blueprints, “virtually all” tariffs have been liberalized in the region, and 98.6 percent of them have been eliminated.

But he added that despite those efforts, intra-ASEAN trade has remained low at just 23.4 percent, or US$520.9 billion, of ASEAN’s total trade.

“ASEAN must tackle non-tariff measures and trade facilitation meaningfully,” he said, according to the prepared remarks, adding that it the AEM-AFTA council meeting would be looking at the outstanding issues.

Later in the afternoon, Chan also said that the group was evaluating ASEAN’s progress in global value chains (GVCs) participation, looking for “pertinent steps” to ensure the region continued to participate.

One of the persistent criticisms of the Trump administration’s efforts to spur a trade war, which has included imposing tariffs on its trading partners, has been that because supply chains have become globalized, few products have their raw materials sourced and manufactured in only one country. That means imposing restrictions on any part of the supply chain can ricochet across global economies.

Chan also noted that ASEAN had been “actively assessing” the “opportunities and challenges” of the Fourth Industrial Revolution and the resulting technological disruptions.

“Stocktaking exercises are underway to ensure that ASEAN remains in good stead to seize opportunities globally,” he said, according to his prepared remarks. That included ramping up efforts to develop Southeast Asia’s digital economy, he said.

ASEAN does bring economic heft to any push to protect the global system of rules-based trade, with both Lee and Chan pointing to forecasts that the bloc was forecast to become the world’s fourth-largest economy by 2030, after China, the U.S. and the EU.

This article was originally published on Wednesday, 29 August 2018 at 16:46 SGT; it has since been updated.