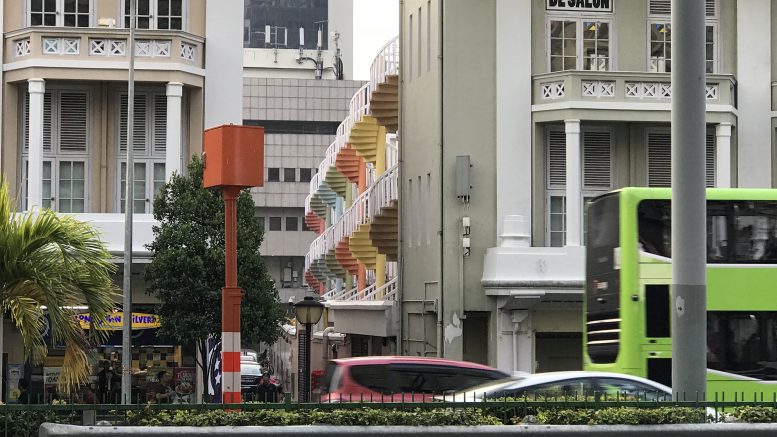 A Singapore street scene in the Bugis neighborhood; taken August 2018.

These are the Singapore stocks which may be in focus on Thursday 23 August 2018:

Wilmar said on Wednesday that its subsidiary Wilmar Sugar agreed to acquire Bunge’s global book of open sale and purchase contracts for raw and white sugar from subsidiaries of Bunge.

The pricing of the acquisition wasn’t disclosed.

The acquisition wasn’t expected to have any material impact on Wilmar’s financial position for the current fiscal year, it said in a filing to SGX on Wednesday.

The proceeds will be used to refinance CapitaLand Mall Trust’s existing borrowings, to finance investments, to on-lend to any entity it has an interest in, to finance any asset enhancement works and for general working capital, the filing to SGX on Tuesday said.

The notes were issued under the S$3.5 billion multi-currency medium-term note program established by CMT MTN in 2007, and they are guaranteed by HSBC Institutional Trust Services (Singapore) in its capacity as trustee of CapitaLand Mall Trust, it said.

The Singapore Exchange Securities Trading has given approval-in-principle for the listing and quotation of the notes, which will occur starting at market open on Thursday, it said.

In July, Sembcorp announced plans to redeem the securities in full, it noted in a filing to SGX on Tuesday.

The perpetual securities were issued under its S$2.5 billion multi-currency debt issuance program, it said.

Fintech M-DAQ said on Tuesday that it had launched a proto-type multi-currency automated quotation service to allow investors to view Singapore Exchange-listed securities in selected currencies.

“M-DAQ’s patented solution allows investors to view, track and trade securities in multiple currencies within a single liquidity pool,” it said in a press release on Tuesday. “This would allow investors to have price certainty including the ability to place limit order(s) in their preferred foreign currencies.”

Singtel said on Thursday that it has completed the acquisition of the technology platform, intellectual property and certain other assets of Videology and its subsidiaries.

Since the April 2018 beginning of the buyback mandate, it has bought back 3,562,600 shares, or 0.1051 percent of the issued shares excluding treasury shares, it said in a filing to SGX after the market close on Tuesday.

China Jinjiang Environment said on Tuesday that Radex XIX ltd. ceased to be a substantial shareholder on Monday, selling its entire holding of 180.62 million shares, or a 12.58 percent stake, to Whitel Management Co.

Singapore fintech iFast said on Tuesday that it appointed PricewaterhouseCoopers Corporate Finance as its lead financial adviser to help identify and open talks with potential investors for its Hong Kong and China businesses.

The company intends to enlarge the share capital of iFast Hong Kong Holdings, or IHKH, and iFast China Holdings by around 15 percent, it said in a filing to SGX after the market close on Tuesday. The Singapore market was closed on Wednesday for a holiday.

The proposed investment is expected to be at above book value of the greater China business and is expected to have a positive effect on iFast’s net tangible assets, the company said.

“The group intends to use the proceeds from the proposed investment to grow the  group’s greater China business, including but not limited to the virtual banking business it is pursuing in Hong Kong,” it said, noting that it previously disclosed it applied to the Hong Kong Monetary Authority for a virtual banking license there.

Based on 2017 financial results, the Hong Kong business, including all subsidiaries, had a net profit of S$2.12 million, while the China business had a net loss of S$4.17 million, it said.

If iFast’s interest in the greater China business had been diluted by 15 percent at the beginning of 2017, it would have increased that year’s net profit by around S$340,000, iFast said.

OKP Holdings said on Tuesday that the tender submitted by its 25 percent-owned associated company, USB Holdings, to acquire a property at 71-85 Phoenix Avenue, Phoenix Heights, Singapore, at the tender price of S$33.1 million was accepted by the property’s collective sale committee on Monday.

The property has a site area of 3,971.9 square meters and a 99-year leasehold tenure with effect from 1969, it said in a filing to SGX on Tuesday. USB plans to apply to the Singapore Land Authority for a grant of a fresh 99-year lease and to redevelop the property, it said.

Kingsmen Creatives said on Tuesday that its indirect wholly owned subsidiary K-Fix (Nantong) increased its paid-up share capital to US$3 million from essentially nil to increase the general working capital and expand the business.

The capital was injected by K-Fix Holdings, which is the sole shareholder of K-Fix (Nantong) and an indirect wholly owned subsidiary of Kingsmen Creatives, it said in a filing to SGX after the market close on Tuesday. It was funded via internal resources and wasn’t expected to have a material impact on earnings per share and net tangible assets per share for the current financial year, Kingsmen Creatives said.

K-Fix (Nantong) is mainly involved in the manufacturing, wholesaling and trading of interior and exhibition furniture, fixtures and displays, it said.

This article was originally published on Thursday 23 August 2018 at 7:44 A.M. SGT; it has since been updated to include items on Singtel and SGX.