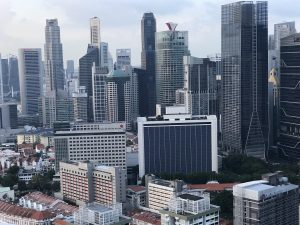 Hong Kong real estate giant Wheelock and Company launched on Thursday a takeover offer for Wheelock Properties (Singapore) in a deal that values the Singapore unit at over S$2.5 billion.

Star’s offer price of S$2.10 per share represents a 20.7% premium over the last traded price of S$1.74 on July 13 when trading in the shares were suspended. The offer also exceeds the highest closing price of the shares since January 22, 2010, Wheelock Singapore said in a statement.

The offer price is, however, about 20% below the Singapore unit’s estimated net asset value per share.

CapitaLand Commercial Trust, Singapore’s largest office landlord, posted on Wednesday a 14% increase in distributable income for the second quarter of 2018, helped by contributions from two recent additions to its portfolio.

CCT’s distributable income for the three months ended June was S$79.4 million compared with S$69.5 million in the same period last year. The rise was mainly due to contributions from Asia Square Tower 2 and CapitaGreen, which offset the divestments of Wilkie Edge, Golden Shoe Car Park and a 50% interest in One George Street.

The trust’s distribution per unit, however, fell 4% to 2.16 Singapore cents from 2.25 Singapore cents as CCT had issued new units to help fund the purchase of a property in Germany.

Looking ahead, CCT said consultants expect office rents in Singapore to continue rising into 2019 due to limited new supply in the central business district. This will narrow the gap between committed and expiring rents for its leases due for renewal in 2018 and 2019, it said.

United Overseas Insurance posted on Tuesday a 16% drop in second quarter net profit due to a sharp fall in non-underwriting income.

In a filing made after the market’s close, UOI said it was hurt by mark-to-market losses for bonds and equities as markets sold off in response to heightened concerns over inflation risk, rising U.S, Treasury yields, growing trade tension between the U.S. and China, and uncertainty over European politics.

Singapore-listed Thai offshore services firm Mermaid Maritime said on Tuesday it has been awarded a sub-sea services contract in the Middle East with an initial contract value of US$16 million.

The contract, which involves the use of a dive support vessel in the Arabian Gulf, is scheduled to be carried out between August 2018 and March 2019. Mermaid said the client is from the Gulf Cooperation Council, or GCC, which groups Bahrain, Kuwait, Oman, Qatar, Saudi Arabia, and the United Arab Emirates.

Mermaid has been trying to expand its client base in the Middle East in response to slower business in the region.

HLA said there were no material differences of opinion on material matters between Leong and the board in its filing to the stock exchange on Tuesday evening.