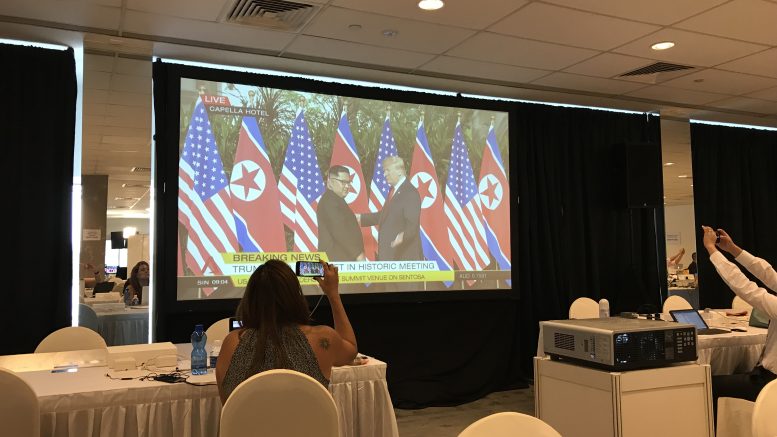 Analyst calls North Korea the big winner from the summit

After the unorthodox release of the summit document, Anwita Basu, analyst at The Economist Intelligence Unit (The EIU), called it a big win for North Korea.

“This is a huge win for the DPRK. In fact, it could be argued, that this is what the North Koreans have been working towards for so long: being legitimized as a state, despite its isolation. The edited version of the footage of this meeting will play on a loop for many months and even years on North Korea’s state television,” she said in a note on Tuesday.

The summit media goodie bags included a small fan that can be plugged into smartphones.

Barton Gellman, a Washington Post reporter and three-time Pulitzer winner who is working on a book about the secret history of the surveillance-industrial state, has one big warning: Don’t plug it in. He took to Twitter to warn that the fan is a potential source of Malware.

For now, the summiteers will just need to make do with the air conditioning available in most of the F1 pit building.

Maybe the fan is just a fan. Bad bet, though. I should probably add: if you did plug it in you’re human. Malware authors abuse the instinct to trust. Until someone competent has a look, I recommend you power down your machine if you can and change passwords with a clean device. https://t.co/vdBVniRQuj 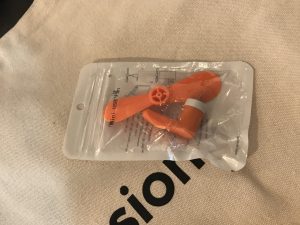 The plug-in fan given away in the goodie bag at the Singapore summit between North Korea and the U.S.

Wall Street Journal reporter Chun Han Wong has noted that the U.S. State Department listed Singapore as part of Malaysia in the transcript of Secretary of State Mike Pompeo’s briefing on Monday. Singapore separated from Malaysia in 1963.

U.S. State Department transcript of Pompeo’s Monday briefing lists Singapore as a part of Malaysia. The hosts of the just-concluded #TrumpKimSummit might have something to say about that… https://t.co/klR1RXFA47 pic.twitter.com/r5TlVZ58DY

In the wake of the unorthodox revelation of the summit document’s contents, the yen has been losing ground against the dollar. Based on what was visible in blown up pictures of the document, one of the most important issues to Japan — resolving North Korea’s abductions of Japanese nationals — didn’t warrant even a mention.

Robert E. Kelly, a North Korea expert who gained fame as the “BBC Dad” when his children burst into a televised interview, was highly criticial of the signed document, calling it “depressing,” and “even thinner than most skeptics anticipated,” including himself.

Wow. If this is it… this is depressing. This is even thinner than most skeptics anticipated. I figured Trump wd at least get some missiles or a site closure or something concrete: https://t.co/tvhLVnlXpj. This looks pretty generic. Maybe there will be some surprise in presser? https://t.co/BbzZaeCzo0

With the text of the document being leaked from the photos, analysts are beginning to pick it apart. For one, it’s being noted just how many times North Korea has agreed to not develop nuclear weapons and has already agreed to denuclearization.

Sept 2005 “The six parties unanimously reaffirmed that the goal of the six-party talks is the verifiable denuclearization of the Korean Peninsula in a peaceful manner.”
“The DPRK committed to abandoning all nuclear weapons and existing nuclear programs”

Channel News Asia has been able to get a copy of at least part of the document the two leaders signed by blowing up a photo of Trump holding up the document.
President Trump agreed to provide security degrees for North Korea, with no details of what those are.
Kim has agreed to complete denuclearization of the Korean peninsula “expeditiously,” but that wasn’t defined. In the past, North Korea has defined this as including the U.S. removing troops from South Korea.
The U.S. and the DPRK, the official name of North Korea, agreed to join their efforts to build “stable and lasting peace” on the Korean peninsula.
The document called the summit an “epochal event of great significance in overcoming decades of hostility.”
North Korea agreed to work toward repatriating the remains of POWs and MIAs, with the immediate repatriation of those already identified.
There was no mention of human rights.

Nearly an hour after the signing ceremony, there are no details on what was signed at the summit.

The U.S. State Department has said only that a document was signed, while AFP has reported that North Korea agreed to complete denuclearization, while the U.S. provided security guarantees, but there was no sourcing or details.

.@POTUS and Chairman Kim Jong Un sign a document after their meeting at the #SingaporeSummit pic.twitter.com/xC3iHlitYx

North Korean leader Kim Jong Un and U.S. President Trump have signed a document which hasn’t been made available to the press yet.

Trump said the two leaders have developed a “very special bond,” and that the document is “comprehensive,” with denuclearization to proceed “very quickly.”

Kim said the “world will see a major change.”

Trump has said the two leaders would meet many more times and that Kim would be invited to the White House.

Ikea Singapore has jumped on the summit coverage for its latest ad, calling an allen wrench a “weapon of mass construction,” and urging “make furniture not war.”

U.S. President Trump has said talks with North Korean leader Kim Jong Un were “top of the line,” and they were heading to a signing ceremony. It’s not clear of what.

“Good color from the foreign pool reporter: According Korean media, Kim arrived at the summit venue 7 minutes earlier than Mr. Trump to show respect. It’s cultural, The young one should arrive earlier than the elder one,” she tweeted around 10:45 A.M. SGT.

Good color from the foreign pool reporter: According Korean media, Kim arrived at the summit venue 7 minutes earlier than Mr. Trump to show respect. It’s cultural, The young one should arrive earlier than the elder one. #TrumpKimSummit

The United States is apparently brushing up on its geography. Google searches for “where is Singapore” have spiked in the lead up to the summit in the city-state, as was originally reported by Mothership.sg. That may help ease some of the common misconception in the West that Singapore is somehow part of China, rather than a sovereign nation located well away from the mainland.

In his interview with CNN, Singapore Prime Minister said, “We are the host, we are the tea and coffee pourers. We do not participate in the
summit, we do not have an influence on what is discussed or the outcome.” The interview was held on Monday and aired on Tuesday.

At the media center in Singapore, local chain Ya Kun Kaya Toast is handling the coffee, or kopi. The toast chef said he’s made more than a thousand pieces of local delicacy kaya toast and the number of cups of kopi served is even higher.

The two leaders have exited the one-on-one meeting, which appears to have lasted around 50 minutes. They exited the meeting and took a quick seat at a table together with other aides and translators, including U.S. Secretary of State Mike Pompeo.

Sound was spotty in the media center, but Trump reportedly said “it will be done.” Context isn’t known. Trump also reportedly said the one-on-one meeting was “very, very good.”
Kim Jong Un reported said he’s willing to work closely with Trump, but that it will be challenging. 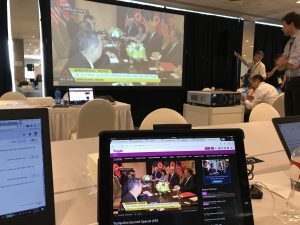 South Korean shares don’t appear to be pricing in much hope of a comprehensive deal at the summit in Singapore.

North Korean leader Kim Jong Un and U.S. President Trump had their historic first handshake and then headed into the private meeting room with just translators. That meeting was scheduled to last about 45 minutes. It included a thumbs up from Trump, but there didn’t appear to be one of the president’s trademark violent handshakes. In Asia, handshakes are traditionally done lightly, and are often more of a touching of hands, rather than a grip.

Trump had opened the morning with another series of tweets, of sometimes difficult phrasing.
“The fact that I am having a meeting is a major loss for the U.S., say the haters & losers. We have our hostages, testing, research and all missle [sic] launches have stoped, [sic] and these pundits, who have called me wrong from the beginning, have nothing else they can say! We will be fine,” he said on Twitter.
Earlier, he had tweeted “Meetings between staffs and representatives are going well and quickly….but in the end, that doesn’t matter. We will all know soon whether or not a real deal, unlike those of the past, can happen!”
Trump had previously claimed that he would know within the first minute by using his “touch” and “feel” on whether Kim would agree to any deal.

Singapore will be spending around S$20 million to host the North Korea-U.S. summit, in a revelation that’s sparked grumbling among the city-state’s residents.

But by comparison, Singapore’s DBS, Southeast Asia’s largest bank, last month announced it would rebrand its advertising to “Live more, Bank less” to highlight its online presence. That was a shift from its long-running “Living, Breathing Asia” campaign.
What’s Singapore getting for the S$20 million? Globally, its name, efficiency and attractions are getting high-profile exposure, albeit sometimes less-than-accurate exposure. Fox News, for one, sparked memes locally after it claimed in a widely shared headline that Sentosa, where the summit is being held, is an isolated island, rather than a well-trafficked and often crowded beach and resort area, complete with a Universal Studios theme park and a casino.