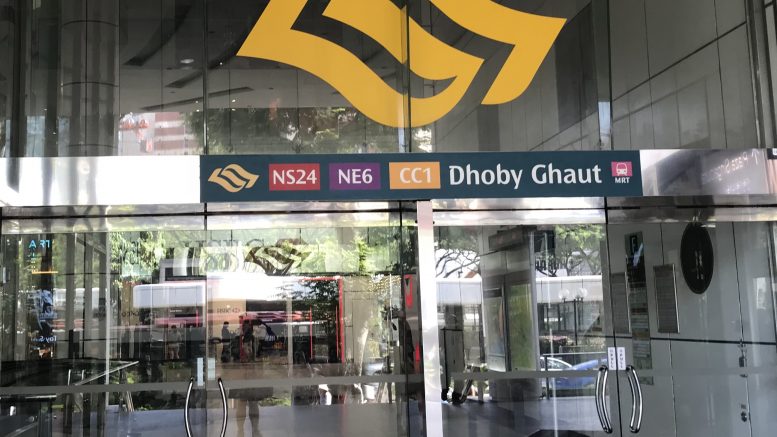 Singapore’s shares will start trade with a middling lead on Tuesday, amid continued jitters over U.S.-China trade tensions, while earnings from Golden Agri-Resources may disappoint.

The Dow Jones Industrial Average ended up 0.27 percent on Monday, while the S&P 500 edged up 0.09 percent and the Nasdaq rose 0.11 percent. Futures for the three indexes had turned nose down early Tuesday.

Some trade tensions have eased somewhat after U.S. President Trump took to Twitter over the weekend to offer what appears to be a major concession to China ahead of talks between the two countries. On Monday, he took to Twitter again to defend himself amid bipartisan criticism, while the Wall Street Journal reported the unprecedented move by a president to interfere in a regulatory matter may have been part of a larger deal.

On Sunday U.S. time, Trump said on Twitter he would help Chinese telecom giant ZTE “get back into business, fast,” by instructing the Commerce Department to “get it done.” Last month, the U.S. had banned ZTE from doing business with U.S. companies for seven years as a penalty for illegal shipments to Iran and North Korea.

“The impulsive knee-jerk response seems to have rung the all-clear bell in much of the coverage with a bias toward viewing Trump’s bellicose rhetoric as ultimately caving time and again,” Scotiabank said in a note on Monday.

To be sure, trade tensions continued to dampen market sentiment.

“Investor sentiment was checked by hawkish policy comments by U.S. Secretary Wilbur Ross – he said that China had not been playing fair
on trade and warned that the U.S. would impose EU steel tariffs if a deal was not reached by 1 June,” Patersons said in a note on Tuesday morning.

Patersons said that the U.S. dollar was bolstered overnight by some investors lightening holdings in emerging market currencies and by higher Treasury yields.

Gaming plays around the region, such as Genting, may be in focus after the U.S. Supreme court ruled on Monday that states could legalize sports betting. Genting has long angled to expand into the U.S. market.

The distribution per unit (DPU) was 3.24 Singapore cents for the financial period about 5 percent higher than the IPO forecast, for an annualized yield of around 5.7 percent, the trust said.

“Our better-than-forecast earnings reflects the resilience of our business model. The growth in the number of connections for residential, non-residential and segment fibre for the relevant financial period was higher than the forecast,” trustee-manager CEO Tong Yew Heng said in a statement after the market close on Monday.

“Demand for prime residential developments in the PRC continues to be healthy driven by continued upgrader demand and population inflow into first and core second tier cities,” Zhong Sheng Jian, Yanlord’s chairman and CEO, said in a statement to SGX after the market close. “While near term volatilities may arise due to the introduction of austerity measures, our quality developments continue to attract the attention of home buyers.”

He also noted that the acquisition of the Tulip Garden project in Singapore was the company’s first entry into the city-state’s residential market.

Revenue fell on a combination of lower palm oil production and lower CPO prices, the company said in a filing to SGX before the market open on Tuesday.

“First quarter 2018 was a challenging period for the palm oil industry. Industry experts are also concerned about a production surplus in the second half of the year, due to seasonality and low production in the first quarter,” Chairman and CEO Franky Widjaja said in the statement. “However, we believe CPO prices will be supported by growing food demand as well as from increasing biodiesel usage.”

Revenue was up on strong performance from the Thailand and Seychelles resorts and higher revenue recognition from the Cassia Bintan and Cassia Phuket condominium projects, it said in a filing to SGX after the market close on Monday.

Revenue fell as two projects, the Panorama and Ardmore Three, were completely sold last year and as interest income from quoted securities was lower, the company said in a filing to SGX after the market close on Monday.

In a filing to SGX after the market close on Monday, the company said that revenue fell due to a lower contribution from property development and property investment, partially offset by higher revenue from the hotel ownership segment.

Revenue from the property development segment, which contributed 68 percent of the group’s turnover, fell 39 percent on-year to S$31.8 million in the quarter, mainly on lower revenue recognition form Trilive, as the project is at its final stage of completion, as well as the absence of revenue recognition from three other projects completed in 2017.

“Ahead of the property market’s gradual recovery, the group has prudently replenished its land bank with predominantly freehold sites in Singapore at attractive prices to maximise the yield potential of these projects,” Roxy-Pacific said in its outlook. “The group looks forward to the launch of another six development land sites in 2018 as it continues to prudently seek attractive sites for development.”

Construction contract revenue fell 12.3 percent on-year in the quarter to S$131.83 million, while the segment’s operating profit rose 93.7 percent to S$6.96 million, amid improved profit margins, the company said in a filing to SGX after the market close on Monday.

Property development revenue fell 45.2 percent on-year to S$8.43 million, mainly on the timing of revenue recognition, while the segment posted an operating loss of S$281,000, swinging from a year-earlier operating profit of S$1.49 million, the company said.

“With the exception of maintenance and enhancement services, which delivered fewer large projects, all business activities contributed higher revenue during the quarter,” it said.

“As the group continues to grow its core operations and strengthen its organization structure and depth for its planned expansion in Asia, performance may be varied as human capital, gestation period for new outlets and operational costs will be some of the key challenges,” the company said in a filing to SGX after the market close on Monday. It said it expected to expand the Jumbo Seafood brand to other Chinese cities, with the sixth mainland outlet to start operations in Xi’an by June. It also entered a joint venture to operate “Tsui Wah” brand outlets in Singapore.