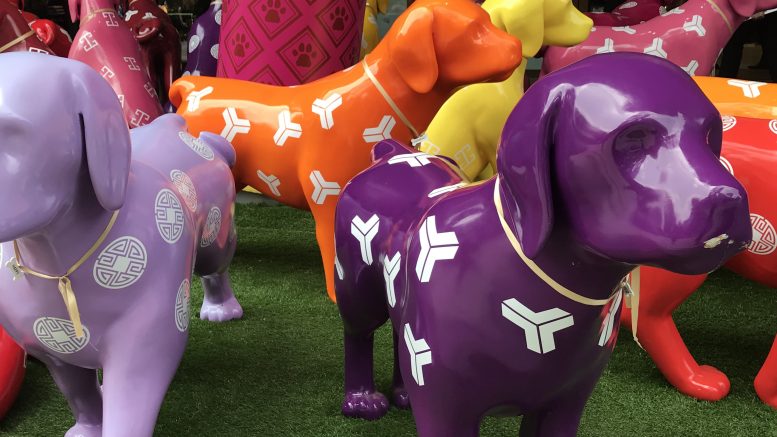 Year of the Dog display on Singapore’s Orchard Road

Singapore’s shares will open on Friday with a positive lead from Wall Street, with positive earnings from key tech sector giants likely to boost sentiment for the city-state’s economy.

The Dow Jones Industrial Average added 0.99 percent, the S&P 500 gained 1.04 percent and the Nasdaq tacked on 1.64 percent. But futures for the DJIA and S&P 500 were nose down in early Asia hours.

Sentiment for the Nasdaq, however, was running high after Amazon’s earnings per share (EPS) came in more than double analysts’ expectations from a Reuters poll and it issued a positive outlook.

Chip giant Intel also beat its quarterly earnings forecasts, driven by its data center and PC businesses, and the company raised its full-year revenue guidance. That may give select Singapore stocks, such as data center property operator Keppel DC REIT, a fillip as well as suggest a brighter outlook for the city-state’s closely watched electronics sector.

The U.S. 10-year Treasury yield also slipped off the key 3.0 percent technical and psychological level, trading at 2.98 percent at 8:13 A.M. SGT, which may ease some market anxiety of higher interest rates.

Some analysts pointed to a few economic clouds on the horizon in the U.S.

“Tax cuts were supposed to lead to more investment spending quickly, a 2018 story more than 2019, but so far new business orders have moved sideways since last October with no sign of a pick up in the immediate future, Chris Rupkey, chief financial economic at MUFG, said in an email late Thursday U.S. time, pointing to a pullback in durable goods orders data Thursday.

Though he noted the U.S. economy was still moving higher, he noted that “time will tell” if the data were a sign the outlook was changing.

“While investors are positioning for a strong report, the drop in non-defense capital goods orders, the stagnation in durable goods ex transportation, weakness in retail sales at the start of the year points to a softer release,” she said in a note early Friday.

Property plays may get a fillip after URA data released before the market open was bullish, showing the price index rose 3.9 percent on-quarter in the first quarter, revised up from an already bullish 3.1 percent preliminary reading earlier in the month.

Sembcorp Industries said its subsidiary Sembcorp Utilities signed a memorandum of understanding Vietnamese province Quang Ngai PC to develop a 750-megawatt gas-fired power project in the province. The contract isn’t expected to have a material impact on this year’s earnings, the company said in an SGX filing after the market close on Thursday.

That compared with Daiwa’s forecast for net property income of S$93.5 million and DPU of 1.88 Singapore cents.

In its outlook statement, it said that continued economic growth in the region was likely to keep logistics-property demand healthy, but it noted that any trade tension escalation could temper growth.

In a separate filing, MLT announced a proposed acquisition of a 50 percent indirect interest in 11 grade-A logistics properties in China for around 985.3 million yuan, or S$205.3 million. It said the properties had a strong tenant base, mostly from e-commerce related sectors. The remaining 50 percent stake would be held by subsidiaries of MLT’s sponsor, Mapletree Investments Pte., the filing said.

The acquisition is expected to be funded with equity and/or debt, it said.

Yangzijiang Shipbuilding reported first quarter net profit attributable to equity holders fell 11 percent on-year to 595.1 million yuan, while revenue rose 6 percent to 4.96 billion yuan. The group landed new orders for nine vessels for a total contract value of US$268 million in the quarter, the company said in a filing to SGX after the market close on Thursday.

“We made stable business progress as the shipbuilding market continued to recovery from a few years of recession,” Ren Yuanlin, the company’s executive chairman, said in the statement. He noted that the company faces uncertainties over protectionism and fluctuations in exchange rates and raw material prices.

The bad blood between Noble and major shareholder Goldilocks continued on Thursday.

Goldilocks, which has sought legal action after Noble had invalidated its notice to propose directors, said in a press release on Thursday that it “encourages Noble to act responsibly [and] cease bankruptcy scare-mongering.” It said that Noble’s “public threats” on the risks to shareholders if the company ends up in bankruptcy are intended to mislead.

Chairman Paul Brough has said in two separate recent letters to stakeholders, which were filed to the SGX, that if the proposed restructuring isn’t completed, shareholders will get nothing.

Goldilocks’ latest statement said, however, that creditors have more to lose than shareholders in a bankruptcy. It added that it didn’t believe Noble would enter a bankruptcy process if the restructuring proposal isn’t agreed to as that would entail the troubled commodity trader providing disclosures that Goldilocks has been seeking without success.

Additionally, Goldilocks said that Noble’s claim that it doesn’t have an alternate restructuring plan is a “RED HERRING,” emphasis from the statement, saying instead that its proposal is still under development and Noble is merely trying to derail it.

Goldilocks, which holds around 8 percent of Noble’s shares, also appeared disgruntled by a Noble SGX filing earlier in the day. In that filing, Noble said the company’s founder Richard Elman had stated that Goldilocks’ assertion that it speaks for shareholders is incorrect and that the investment fund does not speak on behalf of Elman, who holds a deemed interest of nearly 18 percent of the company, nor does it speak for several other substantial shareholders Elman had been in discussions with. Elman continues to support the proposed restructuring, Noble’s filing said.

In response, Goldilocks said it was concerned the statement came from Noble and not Elman itself, and that it believed Noble should “refrain from rumours or simply give evidence.”

Later, Noble made another filing to SGX, this time attaching a letter of support from its Ad Hoc Group of creditors, via their financial advisor Houlihan Lokey. The letter noted that the company was urged to proceed with the restructuring and not be deterred by “abusive proceedings” that Goldilocks brought in the Singapore courts.

“There is no alternative to the proposed restructuring that provides as much value for all stakeholders,” Houlihan Lokey said in the letter.

Jardine Cycle & Carriage reported profit attributable to shareholders for the first quarter fell 36 percent on-year to US$135 million on the recognition of fair value losses due to adopting new accounting standards, while revenue rose 12 percent to US$4.6 billion.

Astra’s contribution to underlying profit fell 4 percent to US$177 million, the company said in a statement to SGX after the market close on Thursday. It noted that under Indonesian accounting standards, Astra reported net profit equivalent to US$365 million, down 2 percent in local currency terms, as the automotive and agribusiness saw lower results, offset by improvements in the heavy equipment, mining, construction and energy businesses.

“Astra is continuing to benefit from stable coal prices, although the car market is increasingly competitive,” it said. Jardine C&C owns around 50 percent of Indonesia-listed Astra.

Cosco Shipping International issued profit guidance that it expected its results for the first quarter would swing to a profit from a loss in the year-earlier period. The profit would be mainly due to contributions from recently acquired Cogent Holdings and PT Ocean Global Shipping, the company said in a filing to SGX after the market close on Thursday.

The company was due to release its results on May 15.

This article was originally published at 8:30 A.M. SGT on Friday, April 27, 2018; it has since been updated to add the URA property data.