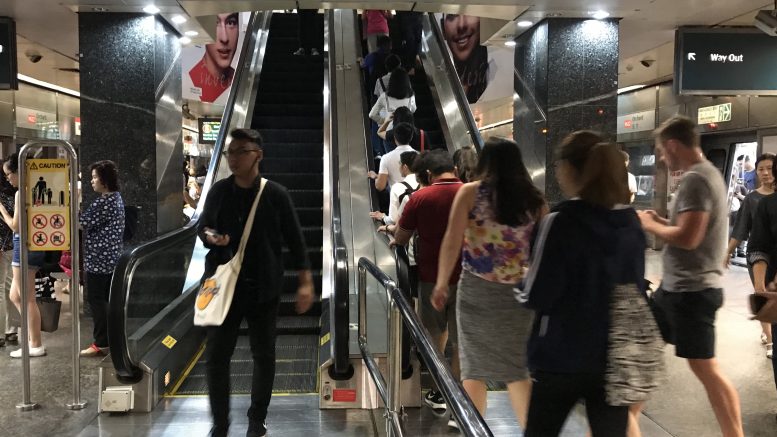 Singapore’s shares are set to start trade on Thursday with positive leads from Wall Street and regional shares.

The Dow Jones Industrial Average ended Wednesday up 0.25 percent and the S&P 500 rose 0.18 percent, but the Nasdaq slipped 0.05 percent. Futures for the three indexes were slightly positive.

The closely watched 10-year U.S. Treasury yield was above the key technical and psychological level of 3.02 percent at 8:25 A.M. SGT, according to Bloomberg data. That level has weighed on sentiment recently, as well as plumping up the dollar.

“The recent rise in U.S. yields is responsible for crystallizing U.S. dollar strength, and this appears to have been accentuated by comparatively strong data flow in the U.S.,” Stephen Innes, head of Asia Pacific trading at OANDA, said in a note on Thursday. “But next week’s U.S. Trade Roadshow to China, which includes the president’s ‘champions of trade’ Steven Mnuchin, Robert Lighthizer and Larry Kudlow, has undoubtedly calmed investors nerves and triggered an unwind of U.S. dollar risk premiums around tariff and trade.”

Innes expected that the dollar would continue to rise on expectations that the U.S. Federal Reserve would increase interest rates in June.

“With equity market sentiment holding firm in the face of rising bond yields, the almighty dollar could move through G-10 currency market like a wrecking ball pulverizing lingering shorts in its path,” he said.

Contract manufacturer and technology services provider Venture reported on Wednesday after the market close that its first-quarter net profit rose 72.2 percent on-year to S$83.7 million on revenue of S$856.0 million, up 1.5 percent on-year.

That was below CGS-CIMB’s forecast for an 80 percent on-year increase in first-quarter net profit to S$87.5 million.

But the stock has already tumbled more than 21 percent since April 19’s close amid concerns about its customers’ sales.

On Thursday before the market open, Noble said Goldilocks’ lawsuit seeking an injunction to stop the annual general meeting on April 30 and to allow the investor to propose a slate of alternate directors was “without merit and are an intentional attempt to obfuscate, delay, derail and/or prevent the implementation of the restructuring.”

Noble added that the claim appeared designed to prevent restructuring, which would “destroy value for all shareholders and other stakeholders.”

Goldilocks had sought legal action after Noble had invalidated its notice to propose directors, claiming that Goldilocks’ shares were registered under a nominee, which would violate the company’s bye-laws.

Sembcorp Marine reported first-quarter net profit of S$5.3 million, down 86 percent on-year on revenue of S$1.18 billion, up 58 percent on-year. Figures for the year-earlier period were restated due to accounting rule changes, the company noted in its filing to the SGX after the market close on Wednesday.

But the rigbuilder attributed the net profit decline mainly to a one-off gain in the year-earlier quarter from disposing of Cosco Shipyard and to lower contributions from offshore platforms, which were offset by higher profit recognition on rigs delivery in the first quarter of this year.

SembMarine said that excluding the effects of the accounting changes, it would have reported a net loss of S$33 million for the quarter.

“Global exploration and production (E&P) spending trend continue to improve due to firmer oil prices in the first quarter of 2018. However, recovery in rig orders is expected to take some time as most of the drilling segments remain oversupplied, with day rates and utilisation under pressure,” the company said in an outlook statement.

It added that it was seeing an “encouraging” pipeline of enquiries and tenders.

CGS-CIMB had forecast SembMarine would report a “slight core loss.” Nomura said after the results that net profit was 8 percent of consensus’ full-year forecast, adding it was “weak,” but also “as expected.”

“The decline was due to weaker overall portfolio performance except for the Japan and Singapore portfolios,” the trust said in a statement to SGX before the market open on Thursday.

“The Australia portfolio turned in weaker performance this quarter due to the more competitive trading environment in Sydney and Novotel Sydney Darling Square’s renovation which was completed in end January 2018,” it said. “The softer trading performance of the U.K. and Malaysia portfolios was attributed to weaker corporate demand, with adverse weather conditions this winter also affecting leisure demand in the U.K.”

But Eu Chin Fen, CEO of the managers, said in the statement that the Novotel Sydney Darling Square was expected to “ramp up” over the next few months.

In the filing on Wednesday after the market close, the specialty rubber chemicals producer pointed to its “green” production as China’s enforcement of stringent environmental protection rules caused shutdowns at many rival companies.

Xu Cheng Qiu, executive chairman, said in the statement that rubber chemical prices were likely to normalize ahead, with bigger players investing more in environmental protection and smaller players “eventually” complying with the rules to resume production. But he added that the company was in a “good position” to boost capacity  as needed and that it was investing in research and development to gain a competitive edge.