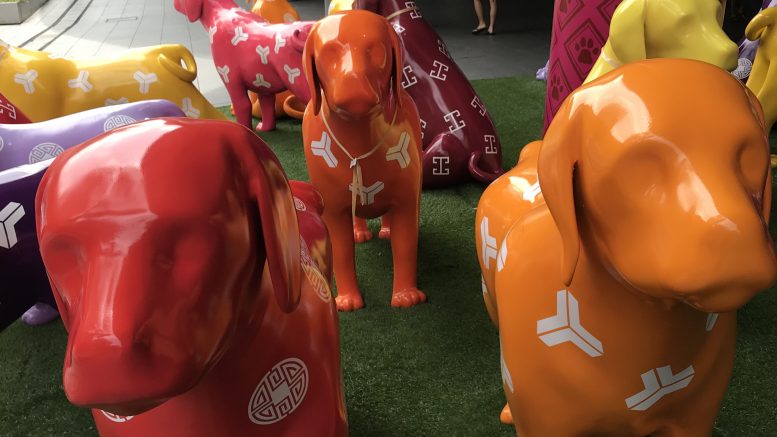 Year of the Dog display at Singapore’s Orchard Road on March 1, 2018

Singapore’s Straits Times Index erased initial losses to trade higher on Friday, despite U.S. President Trump essentially tripling down on threats to impose tariffs on China, claiming he was retaliating for China’s retaliation.

If the war of words and threatened tariffs becomes a real trade war, that would be markets’ worst fear come to life, especially for trade-dependent nations such as Singapore.

”It’s ridiculous to talk about another US$100 billion, which is unlikely to be carried through,” Song said in a phone interview on Friday. “If he thinks China is going to back down, then he’s in a different la la land. The markets have taken the view that it’s not going to happen.”

Song added that while it was impossible to know yet if cooler heads in the Trump administration would prevail, especially as “Trump has surrounded himself with yes men,” the market view was that the trade war could remain rhetorical.

Song didn’t expect China to respond to Trump’s threat until the administration publishes something concrete, but he did expect that China wouldn’t back down.

“[The Trump administration] thinks they’re paying with amateurs. The Chinese response will be calibrated,” he said.

On its surface, the trade threat may be more serious than what can be summed up as “tit-for-tat,” as late on Thursday U.S. time, Trump ordered the U.S. Trade Representative to consider imposing tariffs on an additional US$100 billion of Chinese products.

He claimed that was in retaliation for China’s “unfair retaliation” after the mainland’s quick, strong response to his initial threat of tariffs on US$50 billion in exports was to say it would impose tariffs of the “same strength.”

“Traders, I believe, are betting on the possibility that the proposed tariffs won’t be imposed, or not in full,” Jane Fu, sales trader at CMC Markets Singapore, said in a phone interview on Friday.

She pointed to the two-month consultation period before any U.S. tariffs take effect.

“In that period, the U.S. and China could find time to negotiate and find alternative solutions,” she said. “That’s what traders are hoping for and there’s a high chance that hope will come true.”

In any negotiation, however, China will likely be looking to preserve face. Trump, however, does have a long history of making extreme threats, only to retreat later, a far-from-secretive and somewhat dubious negotiation tactic his biographer described in detail in “The Art of the Deal.”