A weaker dollar, a stronger yen and higher U.S. interest rates. Why they’re happening at the same time is a puzzle.

The Bank of Japan

Those people would then expect the impact on expectations of a change in the BOJ’s monetary policy would likely be greater than those for U.S. monetary policy as the BOJ hasn’t even begun to normalise policy.

“One could argue that, if the rise in U.S. market interest rates stems from Japan or the BOJ, this is likely to be reflected in a narrowing of the gap between U.S. and Japanese interest rates at some point and by a corresponding reaction by USD/JPY,” Nomura said.

The reason Powell might be a driver of the paradox is that under his new leadership, the Fed has failed to tighten policy enough, or will be unable to do so, in response to growing concern about the threat of inflation following the Trump administration’s plan to increase fiscal spending, Nomura said.

That argument would mean “concern about this failure of inability to act is the reason for the rise in U.S. market interest rates,” Nomura said.

“This is the view that the rise in U.S. market interest rates is largely or solely the result of inflation expectations and that the weakness of the dollar against the yen is the result of either a failure of the gap between U.S. and Japanese real interest rates to widen or an actual narrowing of that gap,” Nomura said.

Basically, it’s the inflation, Nomura said, when examining why Trump could be causing the market paradox.

”The thinking behind the view that President Trump is the culprit is that the U.S. output gap has narrowed drastically and that an increase in fiscal spending at a time when the U.S. economy is close to full employment will fuel inflation more than it will boost economic growth, increasing concern about the U.S. fiscal balance and the sustainability of U.S. government debt, and serving merely to drive up U.S. interest rates and the dollar’s risk premium,” Nomura said.

The potential explanation that is most problematic is the one with Trump as the culprit, Nomura said.

It noted that if the BOJ were the culprit, stronger affirmations from Japan’s central bank of its commitment to its existing policy could stem the dollar’s depreciation, the bank said.

If the dollar’s weakness against the yen is due to doubts about the Fed’s policy, Powell could use his upcoming Congressional testimony and the March Fed meeting to make more hawkish comments, Nomura said.

That too, would end the paradox of a weaker dollar amid rising U.S. interest rates, Nomura said.

But it added, the Trump scenario is the most problematic.

”If it is the Trump administration’s illogical fiscal expansion that is driving up the dollar’s risk premium and driving down its exchange rate, it will be difficult to devise a policy response,” Nomura said. 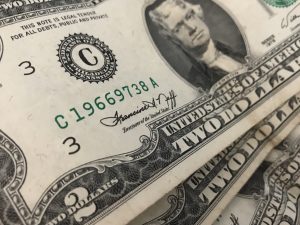 US dollar inches lower as midterm election results trickle in