Singapore-listed property stocks dropped on Tuesday in the wake of unexpected measures in Monday’s budget announcement.

The budget raised the stamp duty on the portion of residential property prices over S$1 million to 4 percent from 3 percent. It also included increases to proximity grants to families who wish to buy public-housing, or HDB, resale flats near or with each other.

In a note on Monday, Nomura said the first-order impact of the measures was negative for the private-housing market, citing two reasons: Firstly, the proximity grants could make HDB resale flats more attractive compared with private residences and secondly, transaction costs will rise with the higher buyer stamp duty.

It noted that the higher buyer stamp duty could also dampen the en bloc market, which has been hopping lately, as it raises costs for developers, which could also dampen overall sentiment for the private housing market.

But Nomura also pointed to the measures’ “signaling” of government intentions.

”While the finance minister is careful to emphasise that the higher buyer stamp duty is introduced to make the Singapore tax regime more progressive, we believe the move could be calibrated to dampen bullish sentiment on the housing market and signals the willingness of the government to intervene further, should home prices continue to rise ahead of market fundamentals,” Nomura said.

Others agreed that the government was flashing a red flag to the property market.

“The one percentage point increase in buyer stamp duty indicates that property cooling measures will not be lifted in the immediate short term,” Tan Chee Wei, tax partner at KPMG in Singapore, said in a note on Monday. “Instead, it shows the government is ready to rein in measures, if necessary, to ensure that the property market does not overheat.”

Indeed, another KPMG partner, Tay Hong Beng, who is head of the accounting firm’s real estate division in Singapore, noted that most private residential properties are priced over S$1 million and therefore would be hit by the stamp duty increase. Tay noted the increase may not have much impact on tax revenue collected.

Some analysts were dismissive of the increased stamp duty’s importance.

”This is to make the tax system more progressive and will not materially impact the private residential property outlook,” Francis Tan, an economist at UOB, said in a note on Monday.

“Although the middle income group will be impacted, we believe that the carefully calibrated adjustment in the rate should not significantly dampen the housing market.” 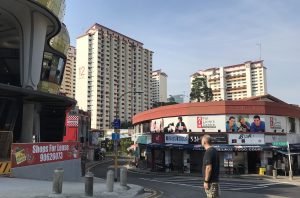