Nomura upgraded UOB to Buy from Neutral and increased its target price to S$32.90 form S$26.40.

The stock’s more than 7 percent valuation decline from its 2018 peak is unjustified, Nomura said in a note on Tuesday.

Nomura said the stock could see an upside surprise if the dividend payout is increased, adding that it expected the bank could increase the payout ratio to above 50 percent, compared with its five-year historical average of 41.2 percent. While it said it didn’t expect the dividend increase with results for the fourth quarter of 2017, it was forecasting it for sometime in the first half of 2018.

It noted that as of the third quarter, UOB had the least exposure to the offshore and marine secotor at 0.9 percent of gross loans, or around S$2.2 billion. “If UOB conducts its ‘kitchen sinking’ exercise, as DBS did, with a NPL ratio assumption of 50 percent, the maximum potential write-offs would be S$1.1 billion.”

Nomura raised its earnings per share forecasts for 2018-19 by 1.1 percent to 4.5 percent, citing a lower non-performing loan formation rate and lower credit cost forecasts. It raised the target after rolling forward to fiscal 2018. 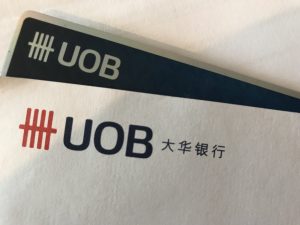